Benign Cause of Brief Stabbing Pains in Breast 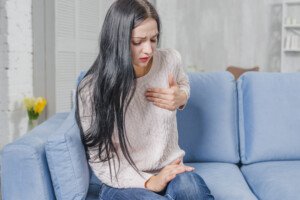 Find out a most unlikely, but harmless, cause of sudden-onset, brief stabbing pains in a breast; and it’s not a tight bra.

Ask yourself this question: Has your arm been pressing up against the breast lately? This is what happened to me. I developed very brief shooting, severe pains in my breast.

I immediately suspected what I call “compression.” This is when my arm “compresses” the breast by leaning or pressing into it.

In the past, this would happen when I slept overnight on my parents’ couch when staying over. The couch isn’t wide enough for me to lie on my back with both arms straight out at my sides on the couch.

The right arm is forced by the couch’s back support to go up on my tummy. When this happens, the upper portion of the arm presses into the outer quadrant of my breast.

Later on in the day I’d notice on and off, or fleeting sensations or aches in that area of the breast. But they were never stabbing or sharp kinds of pain.

However, when I took to massaging my elbow a certain way (I have golfer’s elbow), I began getting shooting piercing jolts in that outer quadrant, as well as middling through vertically.

I’d lean back into my sofa. The arm of my massaging hand was draped over the breast and pressing into it, in order for my fingers to get a firm grasp on the opposite elbow area; the arm being massaged would rest in the sofa.

During these sessions, there was no breast discomfort. But soon after I’d begin feeling some discomfort coming and going.

One day it escalated like mad and took my breath away. I’m talking JOLTING, BOLTS of pain that lasted one to 10 seconds.

I immediately backed off on the particular massaging position, and predictably, the pain began dissipating. But then I’d be back to the positioning, and the problem kicked up again.

Finally, I decided to abandon the position altogether and massage the elbow another way.

The breast pain completely disappeared, but it took about 10 days, dwindling with each day as far as frequency and severity.

When I went in for my routine physical, I mentioned this to the doctor. She wasn’t the least bit concerned.

She did NOT say anything like, “Gee, we’d better get the breast imaged right away,” or, “I don’t like the way that sounds,” or, “That’s likely a sign of something bad.”

No sir. Her demeanor was as though I were describing pain from a first-degree burn from the stove. I asked her what about the “compression” could cause stabbing pain in the first place?

The doctor wasn’t able to offer an explanation as far as the dynamics, other than to say it could have involved nerves and sensitive breast tissue.

She didn’t think it involved ligaments, but DID say it could have involved the chest muscle. She likened the situation to the pain some women get when wearing an underwire bra.

The sharp, stabbing pain in my breast has disappeared, coinciding with cessation of the compression positioning.

Take a good look at your position habits and see if at any time your arm is pressing into your breast.

The resulting pain can be delayed by hours. If the problem persists despite making a correction to your positioning, see your doctor.