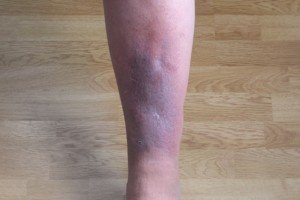 So you’ve been cramped on that airplane for hours and are finally walking on the ground; how long after will DVT blood clot risk last?

“As far as I know, DVT forms while traveling,” says Seyed-Mojtaba Gashti, MD, a board certified vascular surgeon with Broward Health Medical Center in Florida.

“So once you are no longer in the air and resuming normal activity/oral intake, your risk should be at baseline.”

Do not confuse this with the phenomenon of symptoms of a deep vein thrombosis occurring days after the plane has landed!

Some patients do not make this association, since they believe that a blood clot from air travel would necessarily show symptoms right away.

But this is not necessarily so. Symptoms of a deep vein thrombosis can be delayed enough to seem not connected to the air travel.

People who have risk factors for a DVT in addition to just having traveled by air for many hours should be on the lookout for suspicious symptoms.

First off, did you stay in your seat nearly the entire time while on the plane? Not good.

How much did you move your legs in that tight cramped space? Did you do lots of ankle, knee and hip movements or pretty much keep everything immobile? Inertia can cause blood to pool in the lower legs.

Did you drink several glasses of water or consume nothing or only alcohol?

-Swelling in only one leg

-Pain in calve or behind knee; may feel like a cramp

-Redness in calve or at the knee

-Warmth in calve or knee area

-Pain or tenderness upon touching the calve or while walking

Symptoms of Blood Clot Having Traveled to the Lungs

Fainting soon after the air flight is suspicious for a blood clot in the lung. So is sudden chest pain soon after flying. However, these symptoms may occur days after traveling.