How Long in Length Can a DVT Be? 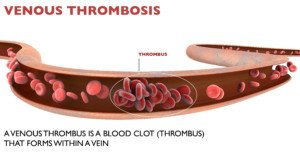 A doctor explains how long a DVT can measure in length; no wonder a breakoff can cause a massive fatal pulmonary embolism.

Perhaps you’ve always thought that a DVT, a blood clot in a deep vein, is the size of a BB, just a little bit of sticky blood matter inside a vein, only a centimeter or so long.

Length of a DVT

“In terms of length or extent of a DVT, they can range from those that are very focal (a couple of mm only) to extensive clot throughout the length of the leg, and even into the iliac veins and inferior vena cava,” says Paul Lucas, MD, surgeon with the Vascular Center and director of the Vascular Laboratory at Mercy Hospital in Baltimore.

In other words, a deep vein thrombosis can extend the length from the foot all the way to the heart, all in one vessel, that extends this length, and merges into the inferior vena cava, a major vein that transports blood from the lower body to the heart where it’s reoxygenated and recirculated.

A DVT that’s almost the entire length of the body has the potential for huge bits of it to dislodge.

And in seconds it can plug up the pulmonary artery where it splits off into each lung, causing near-instant death from a massive or “saddle” pulmonary embolism.

Length of Most DVT’s

“Obviously, most clots aren’t that extensive, but it’s important to note that they certainly can be,” says Dr. Lucas.  “They can cause a myriad of symptoms from pain only, to swelling, or a combination of them.”

There are other, more benign causes of pain and swelling in the leg, but Dr. Lucas warns that if you have these symptoms and there’s no simple explanation (e.g., no recent hard run up a hill), you should at least think about a blood clot as a possibility and get the leg examined.

Both pain and swelling, especially in the lower leg, are worrisome, says Dr. Lucas, but not diagnostic for a DVT.

“In fact, no physical examination finding is accurately diagnostic of a DVT, but suspicion should be rendered.  About 2-5 percent of people experience a DVT within their lifespan.”

It’s not true that the longer in length a DVT, the more prominent the symptoms will be.

A person can have a DVT that extends from foot to hip and not have symptoms, since in about half the cases, these blood clots present with no symptoms.