Can a Deep Vein Thrombosis Be Permanent? 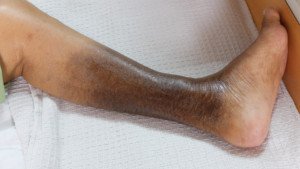 Warning: A DVT can leave permanent effects. You want to do everything possible to avoid this very serious (and highly avoidable) condition.

A vascular surgeon responds to the question: Can a deep vein thrombosis become permanent?

Athletic people or fitness enthusiasts are NOT immune to the development of a deep vein thrombosis.

Even a very fit woman, who’s on birth control and fails to move her legs around much during a long airline flight can end up with a blood clot in her leg.

“Yes it can…which can then lead to the post thrombotic syndrome,” begins Paul Lucas, MD, surgeon with the Vascular Center and director of the Vascular Laboratory at Mercy Hospital in Baltimore.

“These are signs and symptoms that may occur as a long-term complication of DVTs.  This includes chronic pain, swelling, itching, skin discoloration (stasis dermatitis), ulceration, heaviness and even varicose veins.”

“Thrombolysis, the chemical/or mechanical means to break down a clot, can be offered if the DVT is considered acute,” says Dr. Lucas.  “Usually, this can be done within the first two weeks of the DVT formation.”

However, continues Dr. Lucas, not all patients are candidates for thrombolysis. An example would be a pregnant woman developing a DVT.

The thrombolytic agent has the potential side effect to cause sudden internal bleeding. Catheter-targeted thrombolysis involves radiation exposure.

“These would be potentially harmful to the fetus and the mother,” says Dr. Lucas. “After the window of opportunity to lyse the thrombus has been passed, the clot would be considered permanent,” in the case of a pregnant patient.

“Our bodies also have a means to break down a clot, called the fibrinolytic system, and sometimes this can lead to recanalization of veins, or even completely remove the clot.”