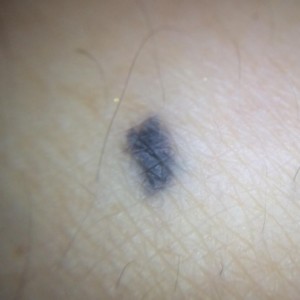 A dermatologist weighs in about what a blue mole most likely means and if this can signal melanoma.

“Yes, some moles will appear blue in a clinical exam and they are called blue nevus moles,” says Ben Behnam, MD, is a board certified dermatologist from Dermatology & Hair Restoration Specialists in Santa Monica, Calif.

A nevus (pronounced knee-vus) is the medical name for a mole.

Dr. Behnam continues, “In reality its not really blue, but instead the way the light hits, combined with the person’s skin tone, makes it looks blue.

These blue moles are typically noncancerous but might be malignant.

“They can look suspicious and I would recommend getting it checked out by a board certified dermatologist, as it is possible for some melanomas to appear as dark blue.”

Ask yourself, has the mole always been blue?

If not, get it biopsied immediately.

This means that a dermatologist excises the entire blue mole, or, at least a portion of it, for analysis under a microscope by a dermapathologist.

If you’ve been aware of the blue mole for some time, and it appears not to have changed in any way, it probably isn’t melanoma, but the only way to be sure is to get a biopsy.

It’s never too early to begin examining your skin on a monthly basis to get familiar with what all the various spots, dots and lesions on your skin look like.

This way, you can monitor for any changes of pre-existing spots, or the appearance of new spots. A new spot isn’t necessarily concerning; it could be a mere blemish.

In addition to skin cancer treatment, Dr. Behnam provides laser, cosmetic and acne treatments, among many others.