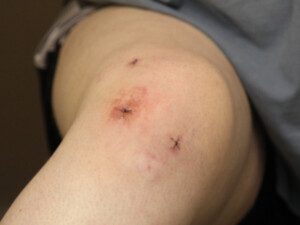 To the morbidly obese patient who hears, “You first need to lose a lot of weight before we can fix your meniscus tear,” this is a crushing blow.

What if the knee pain is so severe that their mobility is impaired? Poor mobility will make a weight loss attempt entirely dependent upon less food intake.

“Meniscus tears in the obese patient can be challenging to treat,” begins Marc F. Matarazzo, MD, a board certified orthopedic surgeon with The Center for Bone & Joint Surgery of the Palm Beaches, FL.

This article was inspired by a real case of a 370 pound woman who’s been told by two orthopedic surgeons that they can’t operate on her MRI-confirmed torn meniscus until she first loses weight.

However, she reports in her blogging that after only standing for a few minutes, the affected knee “locks up.”

Needless to say, she also reports ongoing and severe pain and spends most time off of her feet.

The procedure for a torn meniscus isn’t nearly as invasive as that for a total knee replacement.

Because the blogger does not give any more specific reasons given by these two surgeons (surgery outside her health plan network won’t be covered) as to why they won’t perform the meniscus repair, I decided to find out exactly why.

Why would morbid obesity – which is defined by being at least 100 pounds over one’s ideal weight range for their gender and height – contraindicate the minimally invasive arthroscopic procedure to repair damaged cartilage?

Why can’t a surgeon “just go in there” and make the repair to the meniscus cartilage – which would certainly relieve the pain and allow her to get in much more walking every day?

Knee arthritis is also known as osteoarthritis, which is the wearing away of the cartilage between the thigh and shin bones – which will often eventually lead to bone-on-bone contact unless corrected with a joint replacement.

“Meniscus surgery in the presence of arthritis of the knee can have poor and unpredictable results,” says Dr. Matarazzo.

What if a morbidly obese patient with a meniscus tear doesn’t have osteoarthritis?

Dr. Matarazzo points out, “Based on the data, one would still expect a poorer result because of the presence of obesity.

“The age of the patient would probably affect the likelihood of whether we would expect significant arthritis.

“The knee experiences two to three times one’s body weight with normal walking, and the loss of meniscal tissue reduces the knee’s ability to absorb and distribute that weight — leading to premature arthritis.

“Much of the literature suggests less successful results of meniscal repair and cartilage restoration procedures in obese patients.

“Obese patients also tend to have associated comorbidities such as diabetes, hypertension and others that place them at increased risk for anesthesia complications as well.”

You may be wondering how effective losing weight first would be for the very heavy person who’s in need of a meniscus repair.

“Most studies use a BMI threshold of 35-40 as obese. So having the patient get his/her BMI down to below 35-40 would theoretically reduce their risks.”

You may also be wondering if meniscal repair can be done under regional anesthesia, thereby reducing the risks associated with general anesthesia.

Dr. Matarazzo explains, “Meniscus repair can be done under regional or even spinal, but most surgeons use a tourniquet on the leg to reduce bleeding, which can be very uncomfortable for the patient under just regional.

“Also, spinal anesthesia in the obese can be challenging in its own right.”

Where does all of this leave the 370 pound patient and those in similar situations?

They need to have a full understanding of the risks involved due to their significant level of obesity.

This can take many months – which would mean months of bearing the pain of the damaged cartilage that she reports incapacitates her.

She also reports she’s been on a calorie restricted diet for a long time, but yet, the weight won’t budge.

However, there’s a saying: “Nobody cannot not lose weight.” We can rephrase this as, “Something can’t exist without nothing.”

In other words, 220 pounds of excess body fat cannot be sustained on a low calorie regimen.

Men and women who are in similar boats need to take a much closer, more objective look at their caloric intake.

Morbidly obese people can lose weight without exercising, though of course, exercise is a great adjunct to a weight loss plan.

When lower body exercise is not possible due to severe knee pain, a caloric deficit will still go a long way at shedding the fat. 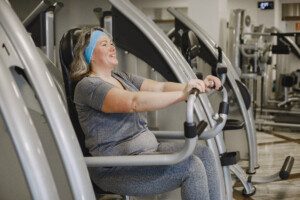 There are many upper body exercises that people with painful knees can do. Pexels, Gustavo Fring

The 370 pound woman is taking in far more calories than her body needs.

This needs to be addressed – very seriously – if her only options for meniscus repair are the two surgeons in her health plan network who say she’s too heavy for the surgery.

Dr. Matarazzo specializes in sports medicine and related injuries. He performs minimally invasive and complex reconstructions, and joint replacements, of the shoulder and knee. Dr. Matarazzo is certified in the MAKO robotic-assisted knee replacement system and has 20+ years of orthopedic experience. He has a special interest in cartilage restoration and preservation.