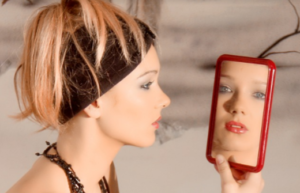 It’s so bizarre how I’d always identify someone ELSE as being autistic, while having no idea that one day I myself would be diagnosed with Autism Spectrum Disorder.

Seven months after being diagnosed with ASD in middle age, I still couldn’t get over how this had gotten past me — until 2021, when it finally dawned on me: YOU’RE AUTISTIC!

The irony is that over many years, I had from time to time observed an individual, immediately noticing their oddity or something “wrong” about them, and concluded they had autism.

It had never clicked that I, too, was autistic. I still can’t really figure out why.

I think maybe it’s because most of the other presumably-autistic people didn’t seem like they could ever be fully independent, while I had always felt extremely self-sufficient.

Another source of denial – at least after I had learned about autistic self-advocate Temple Grandin (and I don’t know when that was) – was that I was capable of loving another human.

I had read a statement that Temple Grandin had made, something about not feeling the capacity for romantic love or something like that, and I absolutely could not relate to her statement.

It made me think that the inability to feel love was a feature of autism. This alone had separated me from autistic people.

Despite always having felt “different,” I had also seen autistic people as quite different from me.

So below are some autistic or assumed-autistic people I have encountered.

Jonathan – a young boy whose mother was chatty with the mother of the girl I babysat for.

He had a very obvious “something is wrong with him” in that he was completely disconnected from the presence of two adults standing over him; never looked at any of our faces; and didn’t respond when I said “Hi Jonathan” while he kept fiddling around with the handlebar of his mother’s bike.

Nikole – an eight-year-old who’d be with her mother while the latter sat in on her son’s karate classes that I took part in as an adult (it was an all-age class).

You could tell “something was wrong” with Nikole, and not just because she relentlessly chewed on this thing she held in her hand.

Initially I thought she was intellectually handicapped, but then one day she spoke: “Can I make brownies when we get home?” I came to realize that autism best fit whatever was “wrong” with her.

I could never engage in persistent chewing on some gadget in my hand; a good reason that my brain was different from an autistic person’s!

Of course, I had a habit of chewing on my tongue … a LOT … but this didn’t count as a “stim” because my tongue was a part of my body.

Girl at the trailhead – one of my special interests is big fat ponytails. I spotted this girl’s big ponytail and planned on complimenting her on it.

She was with, presumably, her father. So I approached, looked her in the eye and gave the compliment.

She said nothing; no registry in her eyes; and suddenly crouched down to stare at something on the ground: a big insect.

Initially I thought she was rude and that her father had failed to teach her manners. I silently walked away, and soon after realized she must’ve been autistic.

When I was a little girl, any adult who complimented my appearance always got a genuine “thank you.” Therefore, how could I be autistic?

John – maintenance man at the apartment I lived at. He acted like a robot when he serviced my unit and spoke.

I found this very off-putting because it made me feel that he wasn’t interested in making the repair. Then I wondered if he was autistic.

I had been a cashier at age 16, 19 and 21, and though I hadn’t been one of those cheery, bubbly, smiley-type cashiers, I also certainly wasn’t a robot.

The redhead – this young woman with striking red hair bagged my groceries.

I immediately noticed this…aloofness, almost an iciness, about her, that was much different than what a “normal” woman would give off who was simply having a crappy day.

It didn’t sit will with me. Though I don’t need a bagger to act sunny to me, I also didn’t appreciate that this woman acted annoyed at bagging my groceries.

At first I thought it might be an intellectual disability, even though baggers with apparent intellectual challenges are typically friendly. But this cold muted woman was strange. Then it hit me: autism!

Even though many people throughout my life had thought I was weird, odd and strange, I certainly couldn’t possibly be autistic because I had always been very verbal, and as a cashier who also had to bag merchandise, I acted a lot more human than the redhead did. Nope, I wasn’t autistic at all.

Man at group home – he was an engaging person who lived in one of the group homes of a complex of group homes.

As a new employee there, I was told he was autistic and could calculate the day of the week of any date – in mere moments.

I just HAD to see this for myself! So I gave him several dates whose days I had already found, and sure enough, he nailed it.

He had a stiff nature about his demeanor and a slight robotic gruffness to his voice – and was unable to live on his own. Not me.

MaryAnne – she was another resident of the group home complex and refused to give me any eye contact while she demonstrated the same calendar skill and also while she attempted to explain how she did it (she totally was unable to).

Well, I had no problem giving eye contact; one more reason I couldn’t possibly be autistic, even though the man above had given me eye contact.

The bicycle man – I saw a news segment about an autistic man who pedaled his bike every day down the same street, tacking on a little distance with each day, so that eventually, a one-way ride took three hours.

He was not training for a race or fitness. How utterly STRANGE. Hey, I’d always known I was quirky, but I could never get caught up in something this bizarre. How could I possibly be autistic?

Luka – the inspiration for the 1987 hit pop song by Suzanne Vega. I read that she wrote this based on a boy she knew in childhood named Luka who was “different” from all the other neighborhood kids.

He’d just sit on his home’s steps and watch the other kids, never interacting with them.

But me? Heck, I didn’t sit around on my childhood home’s steps. I threw and hit balls around the yard, made mud patties, cooked ants to death with a magnifying glass, impaled worms and spiders with twigs, rode my bike tons and played in the local swimming pool.

At recess in grade school I was never off somewhere sitting alone. I was always interacting with at least one other kid (this didn’t mean I had friends). Gee, poor Luka … wonder what was wrong … it had to be autism!

Seeing Autism in Others but Not Yourself

I’ve come a long way, in terms of understanding ASD, since realizing that this was the only condition in the entire universe that could so superbly explain why I had always felt different and always had such weird-butt things going on inside my head.

Autism is a spectrum. Though autistic people share traits, those traits can present tremendously differently from one Autist to the next.

For example, I’ve never had any desire to chew on something external to my body other than food.

Meanwhile, plenty of Autists like “chewelry,” often in the form of a neck pendant. Some chew on their collars or shirt sleeves.

I have lots of stims, though. My biggies: tongue chewing, teeth clicking, rocking, foot flapping, thigh movements, extensive smelling of my hair, feeling my hair, humming a short tune throughout the day that’s dedicated to my hair, and all sorts of rubbing and pressing of my fingers against each other.

Just because you don’t relate to other autistic people doesn’t mean you can’t be autistic.

But the more you learn about ASD, the more you’ll realize (if you’re indeed autistic) just how much you have in common with those “strange” people who seem so different from you.

Though historically, I saw myself quite removed from all those aforementioned Autistics and suspected Autistics (and more whom I did not include in the list), I also saw myself VERY removed from “normal” people and was forever trying to figure them out!

I fully identify as Autistic. The clinical diagnosis fits me so wonderfully.

My sister, her daughters, my brother, his wife and their daughter weren’t at all surprised when they learned of my diagnosis!