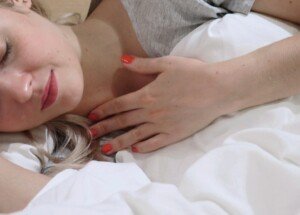 Are you in agony and struggling to fall asleep after having a Renuvion and liposuction treatment of your neck and face?

The list of postop expectations that I received said there could be “mild to moderate” pain up to two or three weeks after the procedure.

The pain I was having was more than moderate, for sure. It was so bad I simply could not truly fall asleep, even though I began feeling drowsy while watching TV come 8:30 pm.

The drowsiness was presumably from the trauma to my body, even though only my face had been worked on.

But also, by around 8:30, I noticed that the very heavy anesthetic had worn off a little – letting the pain get through.

I’d been instructed to take one  Celebrex pill the night before the procedure and two the morning of, but none after on that same day, and instead, to take the next one the following morning (twice a day after that till the supply was gone).

I also couldn’t take aspirin, which I had on hand, because a blood thinner could trigger bleeding.

So I was stuck overnight with only an anesthetic that was wearing off. I figured I’d soon fall asleep.

I got out of bed at 10:30, only having drifted lightly in and out of sleep, and noted that the pain in my neck was worse.

After Renuvion liposuction treatment, the patient must wear a tight compression garment. I was not to remove it. I wanted to, but just had to bear with it.

I got back into bed, and an hour later had to get out again. The pain in my neck was persistent, and was aggravated every time I swallowed.

The heightened pain from swallowing was mostly just right of the center of my neck.

The nice thing about lying down was that this inhibited the need to swallow. But the baseline pain was still there, like a band across the front of my neck – a hot band.

I’d drift in and out of sleep, never truly falling asleep, and eventually having to get up either to urinate or because the pain was so bad, I just had to get up.

As the overnight hours went by, the pain grew worse. It was really sore and somewhat burning. It was at least an 8 on a zero to 10 pain scale. It wasn’t enough to make me moan, but it prevented sleep and made me worry. I even wondered if the procedure had left me burned.

However, if it had left me burned – as I figured at the time – this would’ve been evident at the time of the procedure – or at least it logically seemed that way.

The discomfort got so bad that I moved the compression garment a little bit away from my throat, where it had been smack up against. I was tempted to just take the whole thing off, but I resisted this temptation and just got back into bed, feeling only a little bit of relief from the pain. Renuvion liposuction

The pain was NOT from the garment; it was from the procedure and the wearing off of the anesthetic overnight.

However, the garment aggravated things.

I planned on taking my next Celebrex at 7 am. However, I got up at 6:30 and decided to take it then. And, by 6:30, I noticed that the pain wasn’t as bad; it had diminished a little – enough to be a relief psychologically.

I returned to bed and slept better – actually had a vivid dream about skydiving without a parachute – and woke around 8:40 am.

The pain was now tolerable. It was still there, of course, but tolerable enough for me to move the garment back against my throat (I really hadn’t moved it that much, actually). Renuvion liposuction

In the ensuing hours, the pain gradually diminished more, and I was able to feel, with my fingertips, a lot of areas that had been completely numb the previous night.