Can Seborrheic Dermatitis Be a New Patch that Doesn’t Itch or Flake? 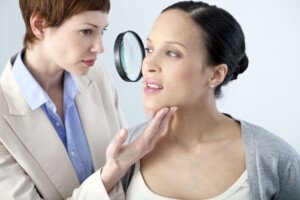 Have a new “growth” on your face that doesn’t itch or flake and gets bigger every few days?

Is it seborrheic dermatitis or keratosis or something else?

One day I became aware of a new patch on my forehead, and thought it might be a seborrheic keratosis, which is a harmless skin growth common in people over 40. I have many, and have had several at some location on my forehead.

But I noticed that it seemed that every several days, this new patch was getting bigger. I wouldn’t think that a seborrheic keratosis would grow this quickly.

The good news was that it was light in color, several shades darker than my skin tone.

However, a melanoma can be flesh colored.

On the other hand, melanomas don’t grow fast enough for someone to detect enlargement every two or three days.

The little patch on my forehead not only looked like it could be a seborrheic keratosis, but it also could easily pass as seborrheic dermatitis.

I’ve had seborrheic dermatitis flare-ups for years. The hallmark signs are not just their appearance, but the itching and mild stinging, along with flaking.

But the new patch on my forehead didn’t itch, sting or flake.

Then one day, when it was a little smaller than a dime, I thought I felt a slight itch where it was.

I decided to apply hydrocortisone cream every night before bed.

Recently my dermatologist had recommended this after I told her that the Nizoral was not working for the seborrheic dermatitis around my nose.

Within a few days, the patch was faded a little. And it continued fading as I applied the cream every night for about a week. After three weeks the patch was virtually gone.

And of course, the rule is always when in doubt, have a dermatologist check it out.