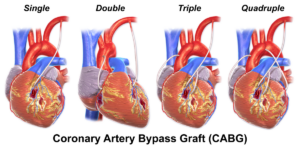 Medical errors can occur post-op coronary bypass surgery, so you really have to be on the ball as a visitor to your loved-one in the hospital.

My mother had quintuple bypass surgery, and I discovered numerous medical errors post-op.

Just because you’re not a doctor or nurse, doesn’t mean you can’t pick up on a medical mistake, like I did.

If your loved-one is scheduled to have, or has already had, coronary bypass surgery, be on the lookout for the following potential medical errors.

Some of these medical errors can also occur post-op other kinds of surgery.

#1: Imaging order for the wrong limb.

I had noticed my mother’s left arm and hand really getting swollen, more so than her right arm. Nurses told me this was a normal consequence of surgery: fluid retention.

But the left arm was just getting huge, so I asked if an ultrasound could be performed (to check for a blood clot).

An ultrasound was then ordered. I was the only person in the room when the technician entered with the machine.

My mother was half out of it when the technician announced to her, “Okay, we’re gonna take an ultrasound of your right arm.”

My mother didn’t catch this error, but of course, I did, and I said it’s the left arm. The technician showed me the order form: It said right arm!

#2. Nurse on duty doesn’t make sure patient has surgical stockings on.

A few times I noted that my mother’s anti-blood clot surgical stockings were not on – in the middle of the day.

#3. Nurse forgets to rehook the patient up to the heparin drip after taking patient for a walk down the hall.

I noticed that the anti-blood-clotting heparin drip wasn’t being fed into my mother, and asked the nurse about it.

He admitted having forgotten to reattach it after returning my mother to the room after a walk.

#4. Planned removal of an IV line that’s supposed to stay in.

My mother had an IV portal set up on the left side of her chest. A doctor told me it would stay there, because her planned pacemaker would be going into her right side.

That’s all I knew. Next day I found out that the nurse had orders from a different doctor to remove the line. I questioned this. Later on, the nurse told me that the orders were corrected, and that the line indeed would remain in.

#5. Patient on fluid restriction, due to renal failure, gets served a fresh liter of water by dietary room service.

My mother’s coronary bypass surgery caused slight failure of her kidneys. She was placed on fluid restriction to ease the burden on her kidneys: one liter maximum of water per day.

During a visit, I noticed that the liter bottle was half empty. At some point dietary came in with my mother’s dinner, and as a courtesy gesture, filled the liter bottle all the way to the top.

My mother wasn’t quite all there mentally and failed to notice this blunder. I pointed it out to the nurse, and after that point, a sign was posted on the room’s door alerting room service not to give the patient any fluids other than what’s specifically ordered.

#6. Physical therapy gives a cranberry-based food to a patient who’s restricted from eating cranberry due to being on the drug coumadin (Warfarin). Cranberry interferes with this blood thinner’s effectiveness.

A physical therapy person placed a cranberry snack on my mother’s food tray. My mother, being disengaged from these kinds of details, failed to notice the error.

My mother was prone to blackout spells that required someone to hold her up while she was on a therapy walk.

The protocol was for someone to follow my mother with a rolling chair in case she had a dizzy spell, so that she could be placed in the chair. Several times I noticed that nobody was following with the chair.

#8. Prior to the CABG: High risk of heart attack has not been ruled out, yet patient, while undergoing tests in the cardiac unit, is not on a heparin drip.

This blood thinner reduces risk of a blood clot forming in the heart: a heart attack.

I was concerned that my mother wasn’t on a heparin drip, and she had been admitted to cardiology due to an elevated troponin level.

Additionally she had chest pain and shortness of breath. Over the phone I asked the nurse to hook her up to heparin after my mother told me she wasn’t hooked up to it.

The nurse hooked her up.

The next day, an angiogram revealed coronary blockage so extensive, that the surgeon wanted to operate right away and told me that a heart attack was imminent.

Medical errors happen all the time, and family members should never be “afraid” to point suspicious things out, or remind medical staff about procedures.