Does a Large DVT Always Cause Symptoms? 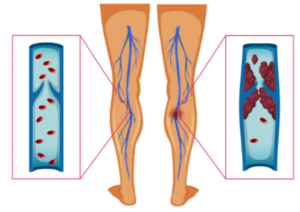 Can you actually have a large blood clot (DVT) growing inside you yet not have any symptoms at all?

When a DVT causes symptoms, they typically are calf pain or cramping, swelling in the affected area and redness.

Perhaps you’ve read that half of DVT’s don’t present with symptoms.

But what about large DVT’s?

“A large DVT in a proximal vein (popliteal, femoral, iliac veins) most often will be symptomatic with at least edema and perhaps pain,” says Seyed-Mojtaba Gashti, MD, a board certified vascular surgeon with Broward Health Medical Center in Florida.

Popliteal = behind the knee

“Some people can have duplicate femoropopliteal veins and even IVC [major vein that goes into the heart], and if they develop a large DVT in one of the two veins, they may not be symptomatic.

“Others may have developed significant collaterals in the past, perhaps from an old DVT, and again may not present with significant symptoms.”

Collaterals refer to development of additional veins to compensate for deficient veins.

“In one study, about 300 patients in the SICU, asymptomatic for DVT, were scanned and 7.5% had major proximal DVT.

“An orthopedic patient cohort was studied pre- and post-surgery. All were asymptomatic for DVT; 2.5% of patients pre-op had proximal DVT and over 16% post-op.”

Of course, it’s logical to wonder how many of these asymptomatic deep vein thromboses would have eventually began producing symptoms if they were not discovered, and therefore not treated.

Dr. Gashti continues, “So you can see that a significant number of even proximal DVTs can remain asymptomatic.

“The question is what is the significance of not treating these patients and should we study all of them?

“These are surgical patients; but to know the exact number of asymptomatic DVTs, a large number of people need to be randomly studied!

“The most common symptoms of large symptomatic DVTs in the acute setting are pain and swelling [edema].

“Discoloration may occur later as the result of postphlebitic syndrome.

“Interestingly in another study where patients who had symptomatic, confirmed DVT in one limb, 5% had proximal DVT in the asymptomatic limb.”