You’re NOT Automatically Worthy just Because You Gained Weight 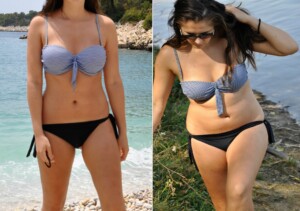 Are you fed up with those side-by-side photos of a woman, one trim and one overweight, with the caption of “just as worthy” below the fat image?

When body image influencers campaign with images of themselves side by side, with the “worthy” captions, they actually DO send the message that a woman’s worthiness is contingent on her looks.

Otherwise, why would they be claiming “just as worthy” relative to a photo showing a lot of their skin, and NOTHING ELSE about themselves such as intellectual, humanitarian or creative achievements?

You shouldn’t say you’re worthy when all you can say about yourself is that when you sit a certain way, your belly has two rolls.

Don’t proclaim your worthiness when all you have to say is that 10 years ago you were a size 6 and now you’re a size 18.

This puts WAY too much emphasis on looks, and thus your crusade backfires.

Do you not have any actual achievements to your name? What have you done for charity?

What have you done for your neighborhood or your family? Did you help the company you work for save thousands of dollars?

Did you save a drowning child or place 70 dogs, that were about to be euthanized, in forever homes? Why not point out REAL achievements?

A person is not worthy just because she’s a woman, nor just because she posted side-by-side images of herself in a bathing suit in which the one on the right shows a belly roll and chunky thighs.

This nonsense has gone too far — though for some, it DOES generously line their pocketbooks due to “collabs.”

We should be seeing more women posting about their accomplishments (publication of first novel; completing a biochemistry PhD program; founding a literacy program; teaching yoga to blind people) rather than how “worthy” they are whether their stomach is flat and firm or resembles bread dough.

The more these body image influencers keep doing this, the more they hammer down the point that a woman’s worth IS all about her looks after all.

It’s a show of insecurity and self-doubt when a woman feels she must continuously post these photo comparisons of her past and current body (showing excess fat gain) and include some caption about self-worth.

Stop it already. It makes you look like you’re desperate for validation from online strangers.

The more you post images of your skin bulging out, the more you put in the minds of many people that indeed…a woman’s worth is strongly tied to her physical appearance.