Blood in Eye After Sudden Bad Headache: Should You Worry? 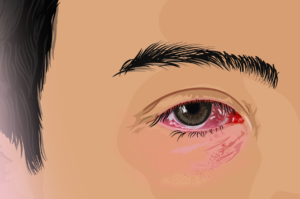 Noticing what appears to be blood in your eye after a sudden bad headache can be quite alarming, as this can make you wonder if an aneurysm in your brain has ruptured or begun leaking.

“Often, cluster and tension headaches are associated with redness in the eye,” says Atif Zafar, MD, medical director of St. Michaels Hospital in Toronto, Ontario, and former director of the stroke program at University of New Mexico Hospital.

Dr. Zafar explains, “In patients with chronic headaches who have eye redness on and off, I would not worry about it too much, but will recommend discussing it with your headache doctor.

“If the redness is associated with vision changes, I’d definitely consult physician right away.

“Now patients with a new-onset severe headache who also have vision loss related to bleeding in the eye, would need emergent brain imaging to make sure rare syndromes like PRES [a brain pathology that includes fluid buildup] or hypertensive encephalopathy or aneurysms are ruled out.”

Of those three, perhaps most people would be most worried about an aneurysm.

After all, many people have heard about men or women who suffered a very sudden, “worst headache ever” and then dropped unconscious – later on dying – with the diagnosis being a ruptured brain aneurysm.

It’s not likely that a brain aneurysm or other cause of a sudden severe headache will ever cause blood to seep into the white of an eye.

What appears to be “red” in the eye following a benign headache may simply be dilated tiny blood vessels.

Eye related symptoms from a ruptured brain aneurysm are typically any of the following (no particular order): 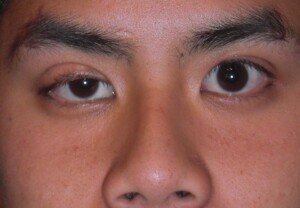 An aneurysm that has not ruptured and that’s not even leaking (it’s fully intact) may press upon nerves, causing:

A leaking aneurysm may cause vision problems, a drooping eyelid and/or a less severe headache.

Again, if any redness in your eye comes with vision changes, you need to seek medical attention immediately.

Sudden vision changes may mean a brain aneurysm, but – they may also mean a stroke or a forerunner to a stroke, the transient ischemic attack (“mini stroke”).

And of course, a sudden-onset headache of thunderclap proportions requires immediate emergency attention, as this is the hallmark symptom of a ruptured brain aneurysm.

Any redness in your eye at the time of this agonizing headache may be pure coincidence, being that “redness” in an eye can have numerous benign causes.