Hydrated but Urine Is Still a Deep Amber Like a Sunset? 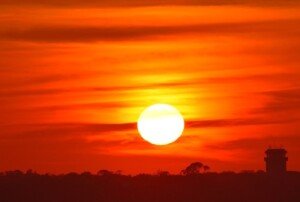 You’re nowhere near dehydrated yet your urine is a brilliant amber and leaves salmon-orange stains on the tissue paper when you wipe!

There’s a most likely cause.

It was happening every so often: a deep amber orange color to my urine. All along I thought it was dehydration, but one day I noticed that the urine stream seemed to be a sunset-like amber color as it emptied into a clear plastic cup.

I’d been collecting my voids in a clear cup since experiencing an apparent vaginal discharge that had trace amounts of blood.

Tests including an endometrial biopsy and abbreviated transvaginal ultrasound were normal. A urologist ruled out a urinary tract cause after a clinical exam and urinalysis.

But the urologist’s basic exam wasn’t enough for me. I wanted to make sure that the blood-tinged discharge had not come from my urethra — or from my bladder. Hence, I was collecting every void.

The second I saw that blazing amber urine come out, my eyes widened. I filled the cup and below is what it looked like. 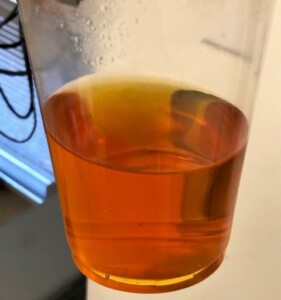 My phone camera dulled the intensity of the amber, but this is close to what it actually looked like. 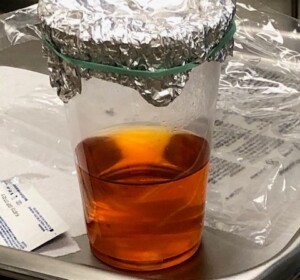 Not only that, but when I wiped, the tissue paper displayed salmon orange smears!

I soon took it to my HMO’s urgent care for analysis. Instead they wanted a fresh sample, even though my home sample had been refrigerated.

The new sample was yellow! How could this be if, since voiding the amber urine, I had NOT taken any water?

In fact, I’d had only one and a half cups of water the entire day!

The ER doctor said I was dehydrated yet was unable to answer this question:

“If I’m dehydrated, how does the urine go from this deep amber to a yellow in the absence of rehydration?”

She thought there was probably blood in the sunset colored sample — but from my postmenopausal vaginal atrophy.

After examining me she said there was no bleeding, but that the friable tissue could have bled a tiny amount a few hours ago and got mixed in with the home sample.

The urinalysis at the urgent care was normal, along with a complete blood workup. I emailed my concern to my gynecologist and urologist via the health plan’s communication system, sending them the images.

The urologist’s nurse said that my urgent care analysis was normal (as if I already didn’t know that) and did not answer my questions:

“Can dehydration cause urine to make a salmon colored stain on the toilet paper?”

“If this amber color is from dehydration, what made the NEXT sample (at urgent care) be yellow, since I had not rehydrated?”

I sent these questions again, and all I got was, “The urinalysis was normal. Urine can be varying shades of amber.”

My gynecologist answered that she highly doubted that postmenopausal vaginal atrophy could cause bleeding that would mix with urine and turn it such a color.

I now had a lot of anxiety over bladder cancer, as all the benign explanations for this rich amber-orange color had been eliminated.

• I had not eaten blueberries or strawberries.

• I had not eaten beets, licorice, carrots or tomatoes.

• I had not strenuously exercised (which in extreme cases can turn urine tea-colored).

• I was not taking B vitamins, which can make urine bright yellow.

Bladder cancer is very uncommon among white, nonsmoking women in their 50s, but I kept worrying about this because…well gee, what ELSE could explain this deep amber?

I began meticulously tracking my water intake and collecting every single sample of urine, including overnight and when I was at the gym.

I recorded time of water intake, how much water, time of collected void and its exact color to see if that amber and its “salmon wipe” would return and a pattern would emerge.

Sure enough, they eventually appeared, and at first, they seemed to be associated with being preceded by long periods without water, and also seemed to be correlated to overnight and morning output.

But as the documentation progressed into several weeks, these correlations grew weaker.

I was getting that intense amber color in the middle of the day and also on two days when I’d had 10 cups and eight and a half cups of water, respectively.

Another alarming point was that on numerous days I had deliberately dehydrated myself, hoping to predictably induce that striking color.

And though it occurred after my first deliberate dehydration, it was not replicated despite about seven more dehydration days that included workouts.

I had to rule out dehydration as the cause and was left with nothing else benign to go on.

A real vexing issue was that during the dehydration days, often the urine was only a dark yellow or, at the most, a light orange — and no dull orange-pink stain on the toilet paper.

But when there were amber voids, or plain orange voids that had salmon wipes, the excrement was very see-through.

Was there ANYTHING I’d been putting inside my body that could even remotely be causing this brilliant amber hue?

The only thing I could think of was the supplement resveratrol, since the powder inside the capsules was a dull salmon color.

But I’d been taking resveratrol for many years with no observation of intense transparent orange-amber urine, let alone stains on the toilet paper.

Nevertheless I googled if resveratrol can turn urine orange. NOTHING came up…except a thread on some site in which the OP was wondering if this supplement could turn pee orange.

She stopped taking it and said, “My pee is still orange.” Then further down was another posting from her that contained an excerpt about a supplement called DIM that could cause urine to change color.

I froze. Earlier that day, I’d had another incident of bright amber orange urine and stained toilet paper. The evening prior, I had taken DIM!

It suddenly all made sense, because I was taking the DIM only sporadically because I kept forgetting to take it daily.

After another googling, I quickly learned from a site for a women’s health care clinic that when DIM breaks down in the body, its metabolites are AMBER in color.

DIM stands for di-indolyl-methane, which has been hailed by researchers as having anti-cancer properties. 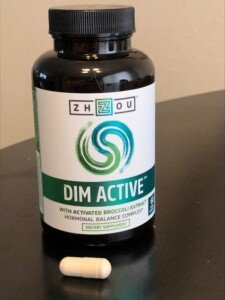 DIM is a compound found in broccoli. Now get this: That previous day, along with the DIM capsule, I’d had a large amount of broccoli!

It makes no sense to take DIM when you’re going to eat a lot of broccoli, but lately, this was what I’d been doing without realizing it — simply laying out my supplements with my meal.

I’d also read that large amounts of broccoli might turn urine orange, due to the DIM breaking down.

With each subsequent void on that day, I noted that the “amberness” diminished a little bit, which would correlate to the metabolites being flushed out of my system over the day, till finally, there was no salmon wipe and only yellow urine.

How come only NOW this was happening?

I had purchased DIM only a handful of times over the years because the local Whole Foods rarely carries it. I also hardly ever ate broccoli.

Certainly, in the past, I’d never combined DIM with broccoli; I’d been more conscientious, and again, rarely ate broccoli until fairly recently.

After further experimentation I’ve determined that in order for DIM to turn my urine that distinctive amber-orange, I also have to eat a lot of broccoli.

If I take only the DIM, I still eventually see signs of the metabolites in the excrement. In the plastic cup, it’s a “pretty” yellow that has golden-light amber highlights. If it’s closer to orange (from dehydration) it lacks that haze.

Every piece of this puzzle has been solved, including why the urine sample at urgent care was yellow when the one right before that had been the striking amber.

I’m betting that had I viewed that yellow in one of my clear plastic cups, it would have been “pretty” with the golden highlights.

The more dehydrated one is, the more likely (logically) the metabolites from DIM will create a color that can only be described as sunset, amber, burnt orange, rusty orange or bronze-red.