Can a Punch Biopsy of Melanoma Cause Metastasis? 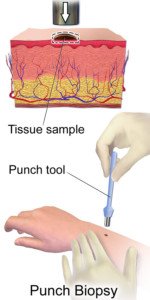 Are you wondering if a punch biopsy of a melanoma can cause it to spread – metastasize – to other areas of the body such as the liver, lungs and brain?

Perhaps you began wondering about this after learning that metastatic melanoma was discovered in a patient who previously underwent a punch biopsy of a worrisome mole.

But an event that occurs after a previous event does not necessarily establish cause-and-effect.

Nevertheless, CAN a punch biopsy of a stealthy melanoma ever cause it to spread?

“This is just not the case,” says Adarsh Vijay Mudgil, MD, double board certified in dermatology and dermatopathology, and founder of Mudgil Dermatology in NY.

Then why does it seem, in some cases, that metastasis comes after a punch biopsy that supposedly “got all” of the mole?

Dr. Mudgil explains, “The problem with a punch biopsy is that it just may not capture the area of interest in a larger pigmented lesion.”

The amount of skin in the margin that’s actually captured may not include very nearby melanoma cells that were already separated from the primary tumor.

In other words, some cancer cells may have been left behind, even if the mole was ultimately diagnosed as malignant and a second surgery was performed to remove margins of “clear” skin around the tumor site.

Patients may think the punch biopsy is the best way to remove a suspicious mole because the procedure is the deepest – and we’ve all heard that the deeper a melanoma is, the worse the prognosis.

But don’t forget that most forms of melanoma spread superficially (wide, laterally) before they begin burrowing into deeper layers of skin. A deep punch may miss the widest outskirts of the melanoma.

Those cancer cells are called micro-metastases and go undetected – not because of negligence, but because there is no way for medicine at this point in time to detect them.

Remember, they are micro-metastases, meaning, just not enough of the cancerous cells to show up on medical radar.

If they make it to the lymphatic system, they will then end up in a regional site and may migrate to a distant site before treatment begins.

The punch biopsy did not cause this to happen.

In fact, the procedure had absolutely nothing to do with the formation of micro-metastases or their eventual migration into a lymph node.

The objective is to fit the entire lesion into the punched-out area. Anything cancerous outside of that area will not be captured for the biopsy.

Can’t the punch be made on the most suspicious-looking part of the mole?

The problem here is that it’s possible that the most concerning portion of the mole may be a benign area.

But remember, the incomplete removal of what turns out to be a melanoma does NOT encourage metastasis or more aggressive growth.

Dr. Mudgil also explains, “A broad-shave biopsy in cases like these [large lesions] is preferable.

“A punch biopsy of an entire lesion with a margin of normal skin is the most ideal for diagnostic purposes” in a growth that presents with features characteristic of a malignancy.

Dr. Mudgil treats infant to geriatric patients, and is versed in all aspects of medical, surgical and cosmetic dermatology. He has published extensively in the medical literature plus has lectured at numerous national meetings.