Can I Get a Bigger Butt Holding a Treadmill & Leaning Forward? 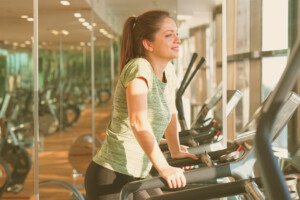 Many women want a bigger butt and would rather get one by walking on a treadmill and leaning way forward while holding on than by intense weight training.

But there’s a problem. No matter how you position yourself on a treadmill – whether you’re leaning way forward and holding on to sustain this position – or walking more upright while clutching the bar in front at an incline – it will not give you a bigger booty.

Have you seen media images of women with enviable butts who are holding onto the front bar, leaning in, their voluptuous behind sticking out?

These posed photos using models create the illusion to those who are not knowledgeable of exercise that this positioning while walking will create a fuller, rounder booty.

Nothing could be further from the truth.

The type of exercise that builds up a nicely shaped behind requires resistance – and a lot of it.

What builds the gluteus maximus muscle?

This is the buttocks muscle. It’s a large muscle group and capable of moving a lot of weight when well-trained.

Even if you’re walking briskly at an incline on a treadmill, this does not demand enough of the fast-twitch muscle fibers in your “glutes” to grow them bigger.

If sustained and paced ambulation or movement (walking, hiking, jogging, aerobics classes) resulted in a bigger butt, then just about everyone who does sustained cardio movement would have a full, curvy behind.

Sprinting, hurdling, speed skating and gymnastics are examples of activities that consist of brief bursts of power; short-duration explosion that fully engages fast-twitch muscle fibers – the type of fiber that grows in size when stimulated enough.

It’s not stimulated enough when you’re merely walking on a treadmill, even when deliberately sticking your butt out as you hold on.

Perhaps the two best exercises that anyone can do for getting a bigger butt are squats and sprints. 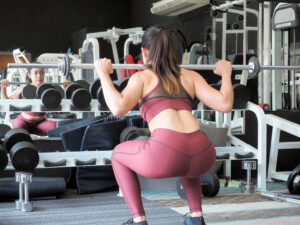 The catch is that you have to really work very hard and be consistent, and even then, you’re ultimately at the mercy of your genetics.

After all, there are women who can easily squat a 155 pound barbell for reps but still have a “pancake” butt, while there are other women who are squatting only 95 pounds but swear that their booty has grown in size since they began squatting.