Can a Bad Fitting Crown Infect the Gums? 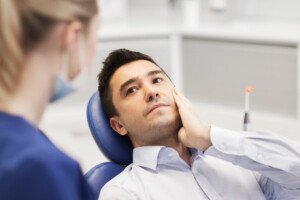 There are reasons why a crown can become bad fitting and possibly cause a gum infection.

Dental crowns are used to restore the health and appearance of a damaged tooth. This means that they need to go down to the gum line to create a uniform appearance.

Dental crowns, which can give the tooth a new look and life, can also result in pain.

This may occur shortly after the placing of a new crown or it may occur much later. If a crown does not fit well, it may infect the gums.

When the crown was put on, the nerve in the tooth may have been traumatized, which can cause it to die later.

This could be the result of putting in a post to help securely attach it to the remaining parts of the tooth.

In some cases, placing the post may lead to an infection in the gums, and a root canal will be needed.

While most people believe that a crown should mean that there will be no cavities in that tooth, that simply is not true.

Cavities may still develop under the crown or at the edge of it, where it meets the gums.

This can cause an infection in the tooth which may spread to the gums. This condition may lead to an abscessed tooth, which needs immediate attention from a dentist.

When a tooth crown is going to be put in place, a dentist will often perform a root canal. This is not always done if the roots of the tooth are in good condition.

Later on, bacteria may cause an infection in the tooth. Removing the infection will require a root canal.

If the tooth has already had a root canal, it’s possible that it can become infected again.

This can occur for two reasons: Either the sterilization was not as thorough as it should have been and some bacteria remained, or it could be because bacteria entered in through spaces between the ill-fitting crown and the tooth.

If the infection occurs in the tooth under the crown, the dentist may be able to treat it by drilling a small hole in the crown and treating it through the hole.

In some cases, the crown may need to be removed and a new one put on.

When to See the Dentist

If you have symptoms of an infection in a tooth that has a crown, you should seek treatment right away.