Why Elderly Person Can’t Keep Eyes Open During the Day 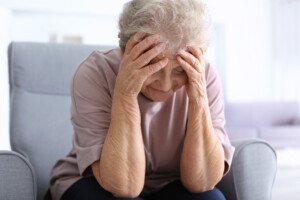 The reason your elderly loved-one eats with their eyes closed and otherwise can’t keep their eyes open during the day may have nothing to do with lack of sleep.

Take a look at the following checklist to see if it applies to you (if you yourself have the problem) or if an elderly family member suffers from it.

• Inability to keep the eyes fully open much during the day even though drowsiness is not the issue.

• Napping does not correct the problem.

• The elderly individual even eats with their eyes closed.

• Their eyes may be closed during conversation.

• They complain of sensitivity to light, though a dim room does not solve the problem.

• Watching TV or viewing a computer screen for longer than a short while is uncomfortable.

• An accompanying complaint is a feeling of fogginess, heaviness or a dull ache behind the eyes.

• When describing the problem, the person uses a hand to motion around their eyes.

• Despite these complaints, their eyes and lids actually appear normal. They are not bloodshot, and the pupils are not dilated. There is no swelling.

• There are no other symptoms such as discharge from the eye, vision problems, headache, dizziness or nasal congestion.

The situation affects quality of life. Though the elderly person’s eyes may not be completely closed at times, they are half closed.

The problem is also new; it’s something that he or she has only been recently complaining about.

When this occurred to my elderly father, I suggested he put lubricating eye drops or “artificial tears” in his eyes. I suspected dry eye.

The situation persisted even though he was using the artificial tears.

BUT WAIT. There is a key point here.

I believed him and then began thinking that the problem was a chronic sinus infection. To get an appointment with an ear/nose/throat doctor, he had to first see his primary care physician.

I also still suspected dry eye, and by then, began wondering if he truly had been using the artificial tears literally every four hours.

After my father described the symptoms to his doctor, right away the doctor said it was dry eye and urged him to use artificial tears.

The expression on my father’s face then seemed to be one of “I confess; I have not been doing it.”

As the doctor explained the importance of using the tears multiple times throughut the day, my father slowly nodded his head. He was busted; he had NOT been using the tears!

The doctor explained that for some patients with dry eye, wearing a special contact lens (which does not alter vision) provides comfort because it yields a gentle contact to the cornea.

This is why, continued the doctor, closing the eyes provides comfort to those with untreated dry eye.

My father has since been using the artificial tears and reports that he can now keep his eyes open during the day – even while eating.

For other elderly people with these symptoms, dry eye may not be the cause. This is why a doctor visit is important rather than putting up with the suffering.