Can GERD Cause a Brief Pulling Sensation in the Chest? 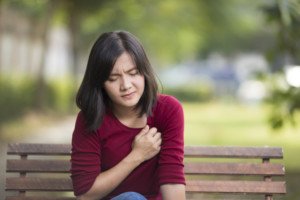 Do you ever get a brief pulling or tugging feeling in your chest and wonder if this can be caused by GERD or momentary acid reflux?

A variety of sensations can affect the chest.

• Numbness (e.g., permanent after a mastectomy)

But it doesn’t stop there. Some people do occasionally feel a tugging or pulling sensation. It may occur only once or come on from time to time.

If they’ve already been dealing with a diagnosed GERD, it will be tempting to blame GERD on the odd sensation.

GERD Symptoms that Affect the Chest

“Typical GERD symptoms include heartburn, regurgitation, sour taste in the back of the mouth,” says Dr. Neil Sengupta, MD, a general gastroenterologist and assistant professor at the University of Chicago, and GI Research Foundation Scholars Award Recipient.

There may also be what’s best described as a pain or ache in the chest, particularly behind the sternum (breastbone).

An esophageal spasm, triggered by acid reflux, may also cause pain – which can have a throbbing or pulsing nature.

But tugging? Dr. Sengupta explains, “GERD does not typically cause a ‘tugging or catching’ sensation.

“GERD can atypically lead to chest pain (non-cardiac chest pain). A pulling sensation (assuming there is no swallowing difficulty) is probably not related to a GI cause.”

Possible Causes of a Pulling Tugging Feeling in the Chest Area

• Overworked muscle that’s going into a harmless spasm, though this is likely to also hurt.

• Fatigued muscle that’s twitching. A big twitch will feel like a painless thumping.

• Some other musculoskeletal issue.

If this happens on a recurring basis, take note of what you were doing at the moment it happened.

After several occurrences you may see a pattern such as a certain body position or movement with your arms.

Also take note of anything you did the previous day that might be connected, such as a chest workout at the gym or chopping wood.

There are no serious diseases that are associated with a patient reporting a tugging or pulling sensation in their chest.

But take note: A transient ischemic attack (mini stroke) can cause a pulling sensation on one side of the entire body – as though an unseen force is pulling a person to one side, making them feel off-balance or slightly tipping to the side.

A TIA would not cause a solitary symptom of tugging only in the chest area.

So if your experience is accompanied by other concerning symptoms (clumsiness, weakness in a limb or difficulty walking, chest pain, shortness of breath, a faint feeling, dizziness, nausea, sweating) then see a doctor immediately.