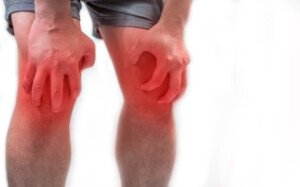 Whether you’re a younger adult or a middle-ager, it is never normal to get swollen stiff knees that hurt when you bend them after playing basketball.

Even the excuse of “I’m not as young as I used to be” doesn’t cut it.

And if both knees are puffy and stiff and hurt after playing basketball, don’t let this equality make you think that it’s a normal response to a lot of running, quick changes in direction or jumping.

It just means that there’s something wrong with both knees.

Why Are Your Knees Swollen and Stiff and Hurt when Bending After Basketball?

“If a person is young, then there is no simple reason for swelling after participating in sports,” says Barbara Bergin, MD, board certified orthopedic surgeon at and co-founder of Texas Orthopedics, Sports & Rehabilitation Associates.

“It is most likely due to an injury, and therefore an appointment with a physician is indicated.”

Even if the knee feels fine later on, and even if the swelling has gone down completely and the stiff feeling has vanished, you need to see a physician whose area of expertise includes the knee.

If you don’t remember an actual event that traumatized your knee, this doesn’t mean it’s not injured. The problem could be a result of some kind of chronic stressor.

Don’t assume that because the knee acts up only after some heavy pickup games of basketball that it’s nothing to be concerned about.

Without treatment it can become worse or become a never-ending problem. If you’re afraid the doctor will tell you that you need surgery, this fear is unfounded.

If you’re actually able to shoot hoops and run back and forth on the court, there’s an extremely high chance that a doctor will recommend non-surgical treatment. This will probably mean taking some time off the court.

What specifically might be causing the swelling and pain when bending?

You could have what’s called “jumper’s knee,” though not all people who have this got it from jumping.

The medical term is chondromalacia patella. This is a frazzling of the cartilage that’s beneath the kneecap.

After playing the sport that aggravates this common condition, the athlete may or may not see swelling.

They will feel stiffness, and some patients describe the sensation as a “fullness” in the knee joint.

Often, bending it brings on pain – but it’s a dull to strong ache rather than a sharp or severe type of pain.

Conservative treatment for chondromalacia patella includes light exercises, icing and backing off of the offending activity until the condition heals. This is not an age-related condition, which is why it’s seen quite often among young adult athletes.

“But if you’re older, the swelling can be related to arthritis,” says Dr. Bergin.

“Rest, ice, elevation and if you can take them, try an NSAID like Aleve or Advil, and see if it gets better. If not, then go see your physician.”