Hemorrhoid Blood vs. Colon Cancer Blood: Is There a Difference? 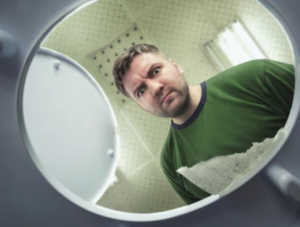 Is there a distinction with the way the blood would look if it’s from a hemorrhoid vs. rectal fresh blood from colon cancer?

Both hemorrhoid blood and colon cancer bleeding from the lower rectum is red rather than brown. It’s often described as a bright red or fresh looking.

It’s scary to see blood on the toilet paper after you wiped following a bowel movement, and even more alarming when you see blood mixed with your stools.

“Typically, bleeding from hemorrhoids usually occurs in the setting of having constipation or frequent straining upon having a bowel movement,” says Dr. Neil Sengupta, MD, a general gastroenterologist and assistant professor at the University of Chicago, and GI Research Foundation Scholars Award Recipient.

“Bleeding typically is small volume, may be on the top of stools, or present only on the toilet paper after wiping,” continues Dr. Sengupta.

“Colon cancer may lead to more significant bleeding or blood intermixed amongst stools.”

The actual appearance of the blood is the same, meaning, it’s the same shade of red, whether it’s from a bleeding hemorrhoid or a cancerous tumor in the lower colon.

It’s not as though a certain shade or red means it must be colon cancer.

The shade changes depending on where in the colon the bleeding (which can also be from an ulcer) is originating.

The higher up in the colon, the darker the blood because it’s older, and it may even appear black when mixed with the stools.

But hemorrhoid blood is always a fresh looking or “bright” red. It may even be pink if a little is mixed in with a combination of residual fecal smear or urine on the tissue paper.

Blood from Hemorrhoids or Colon Cancer?

“Stools themselves are not bloody [in the case of hemorrhoid bleeding] because the stool is formed in the colon (where there is no source of bleeding).

“Colon cancer can be present with bloody stools (not just on toilet paper) because the stool has time to mix with blood in the colon.”

Blood on toilet paper can also be caused by any of the following:

The above four possible sources of minute bleeding can be aggravated by aggressive wiping or by using a paper towel to wipe rather than gentler tissue paper.

“However, any rectal bleeding should be evaluated by a physician or gastroenterologist to determine whether any diagnostic testing is necessary to exclude a serious cause of bleeding,” says Dr. Sengupta.

Another serious cause other than colon cancer or an ulcer is Crohn’s disease.

A bleeding hemorrhoid, though a nuisance, is not a serious medical condition – but it should be treated and managed.