Edge of Longstanding Mole Is Coming Away from Skin: Melanoma? 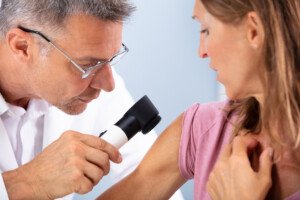 The mole has been there since you could remember, when suddenly an edge of it has started to come away from the skin.

A sign of melanoma is when the border of a mole begins appearing jagged when historically it was smooth. This is a change that needs a medical examination.

But what about if a portion of the mole’s perimeter begins peeling away or lifting off from the skin that it was attached to? Can melanoma ever behave this way?

“Typically, that means that the mole may have been inadvertently rubbed or irritated to the point where it has separated at the junction of the epidermis and the edge of the mole,” begins Nita Patel, MD, Medical Director of Advance Dermatology and Laser Medical Center in Marina Del Rey, CA.

“This is can be seen when a mole gets rubbed from clothing such as a bra strap or waist bands,” continues Dr. Patel.

They can also resemble melanoma, though a biopsy will distinguish between the two.

And unfortunately, sometimes a melanoma can pass for a seborrheic keratosis.

These harmless skin barnacles usually begin appearing after age 40 and can show up anywhere on the skin. 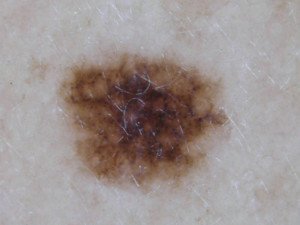 “Some seborrheic keratoses can crumble or flake off with pressure from rubbing because they are not strongly attached at the epidermal junction,” says Dr. Patel.

So what you think has been a longstanding mole may, in fact, be one of these benign superficial growths.

“A new treatment for seborrheic keratoses, Eskata, takes advantage of this feature for removal of these lesions.

“Eskata uses 40% hydrogen peroxide in a pen applicator for removal of seborrheic keratoses as an in-office treatment.

“Seborrheic keratoses are more likely to separate from the skin especially at the edge with no bleeding or anything else unusual.”

What if a mole, however, begins coming away from the skin?

“Dermal nevi are raised above the skin, but will usually bleed if they inadvertently get rubbed, causing separation at the edge.”

Dermal nevi refers to moles that are elevated. If one is scratched, it can definitely bleed from the trauma, but this doesn’t mean it has melanoma growing in it.

“Compound nevi have nests of melanocytes [pigment cells] that are above and below the skin surface and most likely bleed since there is no clean separation at the dermal junction of this lesion.

“Moles can be located just at the junction of the epidermis and appear flat (junctional nevi), but they are less likely to separate since they are primarily flat with the skin.”

When a mole behaves strangely, this doesn’t necessarily mean melanoma, but it means you should have a dermatologist inspect it.

• Increase in height or becoming elevated

• Previously normal looking mole is now “ugly” or much darker

• Bleeding for no reason

• Itching for no reason