Freezing Seborrheic Keratosis: How Long Before It Falls Off? 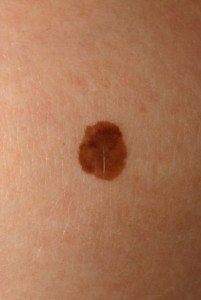 How long does it take for a seborrheic keratosis to fall off after getting sprayed with liquid nitrogen, also known as freezing or cryosurgery?

A seborrheic keratosis is a benign skin barnacle. They typically begin appearing after age 40 and can grow anywhere on the body.

They can scare people into thinking they’re melanoma, especially since they can be dark or with more than one color, uneven in border and suddenly begin changing in appearance.

From a medical standpoint, seborrheic keratoses are meaningless. However, cosmetically, they can be concerning to some people.

I had a seborrheic keratosis on my forehead sprayed with liquid nitrogen (cryotherapy).

My dermatologist already had the freezing-spray out for some actinic keratoses lesions (these should always be removed, as they consist of atypical cells caused by sun damage).

She offered to also spray the seborrheic keratosis (no extra charge), so I said okay.

Within hours, its caramel color turned dark (below). After a few weeks, it still looked the same as it had the evening it got sprayed. 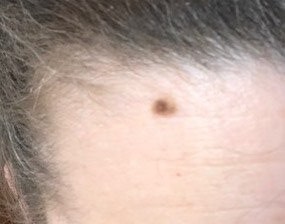 The seborrheic keratosis was just as much stuck to my skin as it was before the cryotherapy.

Finally I contacted the dermatologist’s office and asked how long it usually takes for the liquid nitrogen to make a seborrheic keratosis fall off.

I was told “up to four weeks.”

Twenty-six days later, the lesion was still seemingly very stuck to my skin. At no time did I try to pick it off.

However, under 20x magnification, one area of it seemed to be a little disengaged from the skin. Of course, I did not try to pull at it.

Everything else about it looked the same as it had the day of treatment.

Two days later – four weeks out from the cryosurgery – I noticed before washing my face that the thing was just hanging by a thread, sticking out sideways, ready to drop off.

With the aid of the 20x mirror, I gently disengaged it with my fingers. I’d say that more than 90 percent of it was already completely detached from my skin, and just a tiny tiny portion of it was still connected.

Instead of pulling it in a linear fashion, I gently rotated it to loosen its grip, and it detached, completely intact (below) and still looking as it did hours after the liquid nitrogen spray. 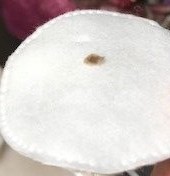 So in my case, it took four weeks on the dot.

The lesson learned here is just because a freezing chemical spray can cause a skin lesion to fall off, doesn’t mean that there should necessarily be any dramatic changes in appearance (as there often is with actinic keratoses).

The lesion seemly came off all at once, save for that teensy part of it. The day prior the whole thing seemed to still be solidly attached, minus the one area where it had seemed to be slightly disengaged.

And ironically, that area was the very area where it was still holding on, on day 28.

How long does it take for cryotherapy, freezing or liquid nitrogen to make a seborrheic keratosis fall off?