Sore Gums from Flossing: Causes and How to Prevent 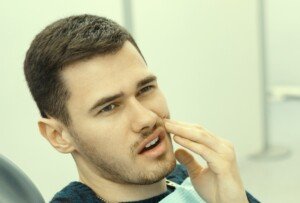 Your gums should not get sore from flossing.

However, there are ways to treat this problem as well as prevent any discomfort from recurring.

“Sore gums when flossing could be because the gums are inflamed, and the way to fix that is to continue flossing until they get better,” says Dr. Haissam Dahan, DMD, MSc, PhD, lecturer at Harvard and McGill University and owner of Ottawa TMJ & Sleep Apnea Clinic.

Now that might sound counterintuitive, as in, adding insult to injury. However, to put it succinctly, the inflamed tissue needs to toughen up.

The way to do this is to subject it to the stress of flossing—by doing this ideally twice a day.

This will “train” the gums to more effectively tolerate the action of flossing.

“Another reason why the gums are sore could be from aggressive flossing (flossing too hard and too quick),” says Dr. Dahan.

“The way to fix that is to floss more slowly and gently, as not to cut your gums while doing it. Using floss tape instead of regular thin floss can help as well.”

• Use a mirror when you floss.

• Floss daily, ideally after eating food that is stuck between your teeth.

• When brushing your teeth, also brush your gums – but do so gently rather than vigorously.

• Brush the outer sides of your teeth, not just the bottoms. Also brush behind your teeth. Many people neglect this area!

• Have your teeth professionally scraped and cleaned at least twice a year.

How do you chew?

Another thing to consider that will help reduce sore gums from flossing is to avoid getting a lot of meat stuck between your teeth.

Now,  you don’t have to give up the biggest culprits, but you can chew less aggressively.

Less aggressive chewing will result in fewer strands of, for instance, tough white chicken getting lodged between teeth. Go gentle on the chewing.

This also includes when you bite into an apple. Go easy and chew easily.

Less stuff stuck between your teeth will mean you won’t have to floss as aggressively — which will mean less soreness to your gums.

Dr. Dahan is a general dentist with a focus on TMJ disorder, facial pain, snoring and sleep apnea management.