How Does Urine Look When There’s Blood In It? 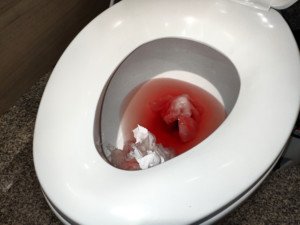 One of the scariest symptoms is “blood in the urine,” yet just HOW does it appear if it has blood in it?

The term “blood in the urine” is used in symptom lists of various medical conditions such as bladder cancer and kidney cancer, but it’s wide open to subjective interpretation.

If there’s a lot of liquid blood in one’s pee, it will be quite visible; the urine may be a clear reddish hue. But it may also be a bit darker, though still clear.

This example applies to a diffuse mix of blood in the urine, such that if the fluid were in a clear container, it would appear to be all one color.

But what about clotted or aggregated blood?

In other words, blood in urine won’t necessarily create a uniform color throughout the liquid.

After my colonoscopy there was blood (from the procedure) in my urine in the toilet bowl. I saw two distinct substances: the yellow of the urine and the red floating collections of blood.

You’d think that the mixture would just be a uniform orange, since red plus yellow make orange, but it was nothing of the sort.

But keep in mind that the blood did not have a chance to swish around with the urine while the urine was still in my bladder.

However, in other instances, blood mixed in urine DOES produce a uniform orange — and it can be dark or a reddish orange.

I once added blood (from a bloody nose) to a clear cup of my dehydrated urine.

So I was mixing a few drops of blood with an already yellowish-orange liquid. The result was an orange-red hue.

However, I have never tried this experiment on a very hydrated sample of urine.

Very hydrated pee would be the color of ginger ale, so mixing liquid blood—such as that from a bloody nose—might make it more of a pink color.

In fact, Dr. Rice says, “Hematuria, blood in the urine, can be light pink to a thick spaghetti sauce consistency.

“The specific color can help us (physicians) with how to focus our workup, but any blood in the urine should be reported to a physician no matter what color.”

A urinary tract infection can cause visible blood in the urine, as well as microscopic levels.

Gross hematuria refers to blood that is visible to the naked eye. For more information on the UTI Tracker, go to utitracker.com.

The UTI Tracker’s features include Facebook integration, an interactive voiding diary and a daily journal.

Think of it as a digital sidekick for achieving relief from your UT infections.

Dr. Rice is with Inova Medical Group in Fairfax, VA, and her clinical interests include bladder, kidney and prostate cancer, minimally invasive surgery and robotic surgery.