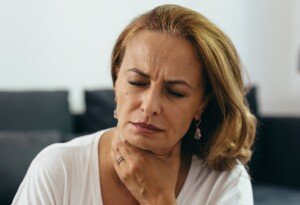 A choking sensation can be caused by a TMJ disorder, but TMJ problems are not among the most common causes of a choking feeling.

It’s scary as hell to suddenly feel that you’re choking or have to gasp for air.

Though some causes are life-threatening, such as a pulmonary embolism (blood clot in the lung) or asthma attack, it’s fair to point out that temporomandibular joint disorder can, indeed, lead to a sensation of choking.

“The muscles which move the TM joint are physiologically active for mainly a few tasks which include eating, talking and swallowing,” begins Brijesh Chandwani, DMD, BDS, Diplomate, American Board of Orofacial Pain, with Connecticut & NY TMJ.

“Swallowing occurs about every few seconds and is a critical part of keeping the airway open (if we don’t swallow our saliva, it would choke the airway),” continues Dr. Chandwani.

“The muscles that move the TMJ along with a group of muscles in the neck complete the swallowing physiology.

“If there is significant arthritis of the TMJ or a muscle disorder of the TMJ, some patients suffer from choking due to incoordination in the muscles of the TMJ and neck.

“The exact mechanism of choking is unclear, and I think it results either due to significant muscle fatigue or muscle spasms in the jaw and neck.

“Patients tend to have a choking feeling especially with very chewy foods as well as finer foods such as seeds and lettuce (they require the muscles to work hard to grind them before swallowing).

“Choking feeling in the middle of the sleep can occur during sleep due to sleep apnea. Sleep apnea and TMJ disorders are often found concurrently.

“Sleep apnea can have harsh consequences on the heart and other vital organs and should be ruled out.”

Only a sleep study (which can be done at home or in a sleep lab) can diagnose obstructive sleep apnea.

Dr. Chandwani also explains, “If a person’s teeth are ground down (due to teeth grinding) or if a person is missing multiple teeth in the back of the mouth, the lack of teeth can also allow the airway to collapse easily and cause a choking feeling. Such patients would show benefit to a mouth guard right away.”

Solutions Tmj disorder, choking sensation
“One of the solutions is to eat softer and mushy foods for about a week; after that consult a doctor if the choking feeling persists,” says Dr. Chandwani.

“Use of over the counter analgesics and warm compresses over the back of the neck and jaw region (for about 10 minutes) can also help.”

Dr. Chandwani has 10+ years of experience focusing on TMJ disorders and sleep disorders.