Can a Brain Aneurysm Cause Head Stabbing Pain? 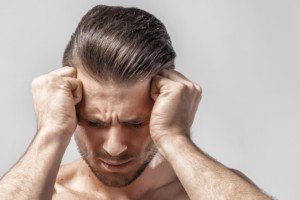 Ever get a sudden “stabbing” type pain in your head and wonder if it’s a brain aneurysm rupturing?

“An aneurysm can cause headaches,” begins Farhan Siddiq, MD, a neurosurgeon with University of Missouri Health Care.

“If brain stabs mean sudden sharp pains, then yes, it may happen with an aneurysm when they bleed,” continues Dr. Siddiq.

But we need to be more definitive with the description of “stabbing head pains.”

When Stabbing Head Pains Are Likely NOT a Rupturing Aneurysm

• They last only a few minutes and especially a few seconds.

• There are no other symptoms.

• After they disappear you feel fine, no other neurological symptoms later such as double vision.

• They keep recurring and you realize, “Hey, I keep getting these brief stabbing pains in my head, but nothing ever comes of them.”

• They’ve been happening over such a long period of time that you can predict how long they’ll last (e.g., four seconds, 10 seconds). And meanwhile, over all that time, you’ve been doing fine otherwise.

• They happen in different parts of your head, and especially if they’ve occurred in every possible location over time. 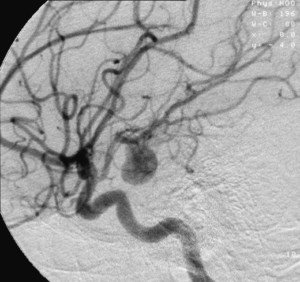 The sac-like structure is an aneurysm. Source: Lucien Monfils

Dr. Siddiq explains that a “typical description [of a ruptured aneurysm] is sudden onset, with patients sometimes saying the ‘worst headache of my life,’ which does not resolve with over-the-counter medications.”

If a brain aneurysm is rupturing, you will NOT feel better or improve as the process unfolds.

You will not be able to function normally as blood is quickly leaking into your brain.

If you’re up and about and doing what you normally do, after you just had a very brief piercing pain in your head, and you don’t feel dizzy, faint, off-balance or have any other worrisome symptoms, chances are you had a benign “icepick headache.”

Do not confuse the famous seconds-long icepick headache with a rupturing aneurysm.

Many people do experience very brief icepick headaches, and often, the cause is never determined.

One benign cause, though, is a spasming muscle in the scalp.

As for aneurysms, Dr. Siddiq explains, “The diagnosis becomes a bit difficult in patients who have chronic, daily headaches and migraines since they may have several episodes of headaches.

“The key thing to remember is that if they have a new onset of sudden headache, which is severe and different in characteristic compared to their usual migraine, then medical advice should be obtained – even consider an ER visit if the pain is severe.

“We also have to remember that pain scales are very subjective and are not a very good generalized measure of a disease symptom.

“During some instances, an aneurysm may not bleed and still cause headaches due to mass effect.

“If an aneurysm becomes very large and pushes on the nerves or other surrounding structures, that can also cause headaches.

“In general, smaller aneurysms are not known to cause pain. They are asymptomatic unless they are pushing on nerves or they bleed.”