How Fast Can Abdominal Aortic Aneurysm Grow and Kill? 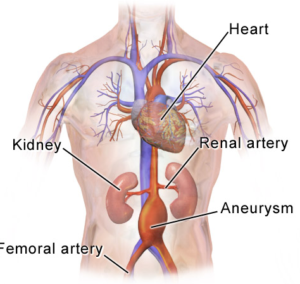 A small aneurysm seemingly ballooned in size and unexpectedly killed a woman.

Violet (Sue) Livene Nelson, 80, collapsed in her home in Wokingham, Berkshire, England, in 2016.

As of March 2012 the dilation measured just 3.6 cm. Her general physician did not refer her to a vascular specialist.

If you’ve been diagnosed with even the smallest abdominal aortic aneurysms, or a “dilation,” “dilatation” or “enlargement,” then you absolutely should seek out a consultation with a specialist, which would be a vascular surgeon.

Nelson was only instructed to come back to her primary doctor for annual reviews to check on the growth. She complied for 2013 and 2014.

How fast did this abdominal aortic aneurysm grow?

The protocol at the Wokingham clinic at the time was that 5.5 cm was the cutoff point for which a patient would automatically be referred to a specialist.

This is why the general practitioner never referred her, thinking she was in a safe zone with the 3.6, 3.7 and 3.4 cm measurements.

So based on this information so far, it may seem that actually, it’s NOT crucial to immediately seek out a vascular physician if you’re told you have an AAA measuring three point something centimeters, or even something in the low four range.

But this story takes an unexpected turn.

Nelson, for reasons nobody will ever know, failed to make follow-up appointments for 2015 and 2016. She also had never told her husband about the 2012 diagnosis.

Her husband had told the coroner that in the several days preceding her death, she had not been well, but on the morning of her fatal collapse in the kitchen, she had seemed better.

Did the abdominal aortic aneurysm really grow THAT fast?

A postmortem report showed that the AAA was about 10 cm.

How could the abdominal aortic aneurysm, measuring only 3.4 cm in 2014, grow fast enough to swell up to 10 cm only three years later?

The 10 cm bulge turned out to be much higher up in the thoracic cavity than was the original, much smaller bulge that was found in 2012!

Dr. Collin pointed out that a general practitioner would not have known to refer a patient to a specialist over a 3.6 cm aneurysm, especially since two years later it had apparently shrunk.

However, a referral could have saved her life, because, as Dr. Collin stated in the report, a specialist would have conducted a more thorough scan.

The report states that a specialist would have suspected that the small dilation was actually the lower portion of a much larger aneurysm!

As a result of this investigation, the Wokingham Medical Practice has now implemented a system in which any-size AAA nets a referral to a vascular specialist.

Thus, as you can see, this situation turned out to be a missed larger aneurysm rather than a super-fast growing aneurysm.

Nevertheless, how fast CAN an abdominal aortic aneurysm increase in size?

“Most AAA’s, approximately 75%, are found when the patient is asymptomatic,” says Sendhil Krishnan, MD, a board-certified adult general cardiologist with advanced subspecialty training in interventional cardiology.

“As the aneurysm gets bigger it tends to grow faster due to the pressure that is placed on the arterial wall.

“An analogy to consider is like blowing up a balloon. When you first start to blow the balloon it takes a lot more effort for it to expand.

“However, once it has reached a certain size it becomes easier for the balloon to expand and be inflated quicker.

“Typically patients should continue to be monitored closely. Often doctors will place patients on beta blockers which will help reduce the sheer stress on the aortic wall.”