Why Is Sleep Paralysis More Common in Younger People? 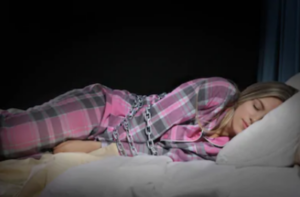 It’s no secret that sleep paralysis is much more common in younger people.

“Essentially sleep paralysis is when your brain wakes up but your body is still in REM sleep,” says Joseph Krainin, MD, board certified in sleep medicine and neurology and founder of the online sleep apnea clinic Singular Sleep.

REM stands for rapid eye movement—that phase of sleep during which we dream.

“During REM sleep our bodies are basically paralyzed to prevent us from acting out our dreams, which could be really dangerous,” continues Dr. Krainin.

I haven’t been young enough to be considered a young adult for many years. Every once in a rare blue moon, I have sleep paralysis.

But I used to get it much more often during my teenage and college years as well as younger adulthood.

I once even got it during a brief nap at work while I was sitting at a table inside a storage room, head down in my arms.

“Younger people may be at increased risk for sleep paralysis for two reasons,” says Dr. Krainin.

“First of all, their biological rhythms often lead to ‘delayed sleep phase’ resulting in deeper REM periods at the time society demands that they wake up.

“Also, younger people often have more disrupted sleep due to a variety of lifestyle factors. This sleep disruption is a major cause of sleep paralysis.

“If you are sleep deprived from, say, pulling an all-nighter for a term paper, the next night of sleep you will have ‘REM rebound’ — a lot more dense REM sleep — that will put you at increased risk for sleep paralysis.”

If you’re young and experiencing sleep paralysis and it scares the daylights out of you, my recommendation is to stop being afraid of this natural phenomenon.

Remind yourself that it’s totally harmless. When’s the last time you heard about someone becoming permanently paralyzed from sleeping?

Permanent paralysis results from spinal cord damage sustained in motorcycle and car accidents (do you wear your seatbelt?), diving into water before first checking its depth, sports injuries and miscellaneous falls.

Permanent mobility problems can also be caused by stroke and traumatic brain injury.

Spinal damage and brain damage are not caused by the phenomenon of sleep paralysis. Next time it happens to you, play around with it; see what happens.

• Try to speak.
• Don’t panic.
• Be scientific with your approach.
• Try to float above your body.

I’ve tried this and have actually felt a sensation of levitation (my eyes are always closed when I try this). Then when I open my eyes I’m in bed. Sometimes it’ll feel like only my legs are levitating, outside my body.

I really miss all those times in my younger adulthood when I had sleep paralysis several times a month.

If the sleep disruption that so often happens to younger people leads to sleep paralysis from REM rebound, what about the sleep deprivation that not-so-young adults experience?

This age group is sometimes called the “sandwich generation,” as they are simultaneously taking care of kids under 18 AND aging parents. Talk about lost sleep!

On top of that many work full-time outside the house and are stressed by bills, saving up money for their kids’ college tuition, battling workplace problems, the daily dread of the morning commute and so other issues that come with life and heavy responsibility.

There has been no research investigating why sleep paralysis occurs mostly to teenagers and young adults. There is only best conjecture.

In 2013 Dr. Krainin was elected a Fellow of the American Academy of Sleep Medicine, an honor reserved for sleep doctors who’ve made significant contributions to the field in education, research and service.