Can Prostatectomy Cause Permanent Incontinence? 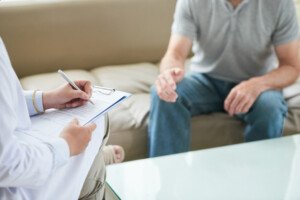 If you have prostate cancer, there’s no way around a prostatectomy—it has to be done—but can a prostatectomy really make you permanently incontinent?

Dr. Cavanaugh continues, “But the risk varies greatly by treatment choice (surgery versus radiation, etc.). A frank conversation with your physician is the best option to evaluate your risk benefit ratio regarding incontinence and prostate cancer.”

A study of 581 patients was done by Eastham et al (The Journal of Urology). Prior to the RR prostatectomy, all the patients were continent.

An uncontrollable risk factor for permanent incontinence following prostatectomy is age: The older the patient the more likely long-term incontinence.

However, surgical technique is also a factor in the likelihood of prolonged incontinence.

Additional variables that influence likelihood of long-term incontinence vs. regaining continence post-prostatectomy include:

• Stage of prostate cancer at diagnosis

Though these directives sound bluntly harsh, they may be quite realistic if your prostatectomy is scheduled many weeks or even several months out in advance.

And if you haven’t even seen a doctor yet for the symptoms that are making you think you might have prostate cancer, you should still strive to lose weight if you need to and get more serious about a workout regimen.

Don’t wait until you’ve been diagnosed with prostate cancer to finally start making improvements in your habits.

A study by Wolin et al in the Feb. 2010 Journal of Urology took a look at the duo of obesity and lack of exercise as driving forces behind permanent incontinence after a radical prostatectomy.

“Our findings suggest that obesity and physical activity are important contributors to post-prostatectomy urinary incontinence,” says the paper.

The report also notes that exercise may provide a better outcome, as far as regaining continence, even if the patient doesn’t lose excess weight.

So if you’re struggling to lose weight via better diet, don’t quit exercising!

The paper states: “Physical activity may reduce risk of incontinence by increasing overall muscle tone, which may facilitate urine control.”

Also, “Obesity may increase the risk of incontinence by placing additional physical strain on the bladder.”

The study authors acknowledge a phenomenon that may have occurred that resulted in the better outcomes for at least some of the non-overweight, preoperatively physically active patients:

Non-overweight, active men are likely more health conscious, and thus more likely to follow their doctor’s orders to do Kegel exercises—which are instrumental in regaining continence.

The study authors point out that their investigation had several limitations, but nevertheless, the results are intriguing.

It only makes sense that the fitter you are before a major surgery, the more favorable the long-term outcome is likely to be.

Only a very small percentage of men suffer permanent incontinence after prostatectomy.

For more information on this topic, contact Cancer Treatment Centers of America at (855) 993-3381