What Is a Mixed Brain Tumor? Definition in Plain English 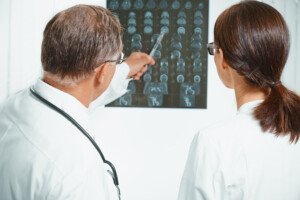 A mixed brain tumor can be thought of as a blended brain tumor. This common term in neurology refers to a type of malignant mass that is composed of more than one type of cell.

The type of cell is called a glial cell.

Glial Cell Defined
Certainly you’ve heard of neurons. You probably know that neurons conduct “nerve impulses.” There are sensory and motor neurons. They are messengers in the nervous system.

But the nervous system also needs support staff. These are the glial cells, and they do not conduct signals. But they do surround the neurons to give them support and insulation.

In fact, there are far more glial cells in the body than neurons.

When it comes to malignant brain tumors that are blended, at least one of three types of glial cells are involved.

A cancer that arises from a glial cell is called a glioma.

(By the way, not all tumors or masses that end in “oma” are cancerous. The suffix oma refers to mass or concentration, and in some cases it’s benign such as in the case of a Schwannoma – a proliferation of glial cells called Schwan.)

A mixed brain tumor has at least two of the glial cell types above. Usually the mix is of the oligodendrocytes and astrocytes.

The name of this tumor is called a oligoastrocytoma, though it has been referred to also as a oligodendroastrocytoma.

The ratio of one glial cell type to another in the cancer can vary. There may be a predominance of, for instance, oligodendrocytes over the astrocytes. Ependymocytes may also be included.