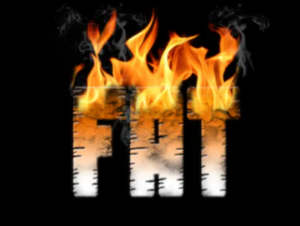 Between rock wall climbing and yoga, which burns more fat depends on the skill level of the person.

There are circumstances under which climbing a wall with “holds” will burn far more calories or fat per the same time spent practicing yoga.

Let’s take a woman who’s a novice at indoor sport climbing and also yoga. She will struggle at both.

I used to spend a lot of time rock wall climbing and became a solid intermediate climber (5.10 level).

The one thing that any experienced climber will tell you is that very typically, novice men (and many beginning women) will try to “pull themselves up” the route when top roping (rope support is above them on a pulley).

Their torso or trunk will be squarely facing the wall as they struggle to pull themselves up using arm muscle.

This is more common in men because they have more upper body strength naturally, but stronger women who are new to climbing won’t be able to resist trying to pull themselves up the route.

This makes for a fatiguing, noisy ascent (feet and legs struggling and banging against the wall).

It’s almost like trying to do ascending pull-ups with a little help from the legs and feet. Yes, you can think of this as a strength training set in a vertical direction.

Usually, the novice gets so exhausted climbing this way that he or she must sit back in their harness, supported by their belayer, and rest their burning muscles – similar to resting them after doing a set of pull-ups at a regular gym.

Once this novice reaches the top of the route, they feel pretty worked over and a rest is needed for at least five minutes before trying another route.

Though it’s not all of their body weight, it’s a good chunk of it, because beginners don’t know how to ascend by pushing off with their legs and feet. Instead they pull upward with their upper body.

If they’re new to yoga, they will struggle with that too.

When I was a personal trainer at a gym some years ago, I’d tell my clients, “Struggling burns fat.”

A novice who passionately tries to perform yoga poses will struggle and feel a workout with an elevated heart rate. 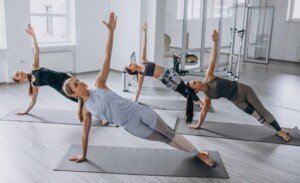 If they stick with yoga, several months later the poses that were difficult will be a breeze and feel like a simple warm-up rather than an actual workout.

It’s the same with rock wall climbing. The person who struggles up a 5.7 rated route will be gracefully and fluidly ascending it several months later – primarily using their feet and legs.

The novice climber will burn more calories than the experienced yoga practitioner simply because he will be struggling and the latter won’t be. 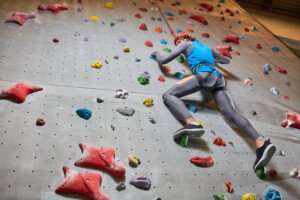 If that prolific yoga enthusiast is easily flowing through poses that seem impossible to most athletes, they’re doing what, to their body, is a non-struggle.

They are so well-adapted and trained that they’re barely breaking a sweat, if at all, and can comfortably converse while moving from one very impressive pose to the next.

You won’t be burning too many calories doing something that your body “thinks” is easy and that doesn’t elevate your heart rate much.

But if an inexperienced individual (who may be quite good at yoga) takes to climbing for the first time – let’s say a 5.7 or 5.8 rated route, even a 5.5 – that person will instinctively ascend the wrong way.

That means a lot of upper body pulling and yanking, simulating a set of vertical partial-bodyweight pull-ups. This is a significant calorie burn for those several minutes.

Now if you take that, minute for minute, and compare it to a yoga class – the haphazard climbing wins hands-down for burning fat.

The novice wall climber will burn more calories, minute for minute, than will the novice yoga practitioner.

What About the Fat Burned by an Advanced Climber?

If you’ve ever watched skilled indoor climbers, they just don’t appear to be pulling themselves upward. 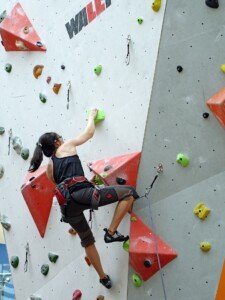 Even an intermediate level climber on a beginner’s route will not appear to be pulling themselves up – because they won’t be.

An experienced climber knows how to position their feet under them so that they can push upward with their legs, eliminating pull-up-like motions.

If they need to pause while in mid-climb without belayer support, they know how to position their feet and hands so that they are hanging straight-armed.

This position can be held for several minutes comfortably, as the legs absorb most of the body weight.

Often, the legs are positioned so that the climber is sitting on their butt, further eliminating resistance.

A novice climber will attempt to rest mid-climb by holding themselves in a semi-pull-up position, arms bent, continuously stressing their upper body muscles – and fatiguing very quickly.

With all that said, it’s my opinion as a former personal trainer, former indoor wall climber and current yoga practitioner that an advanced climber will burn more fat than an advanced yogi.

What about an advanced climber on a route that, to this individual, is difficult?

Well, because a skilled climber knows all the techniques of ascending, those techniques will be applied even when the route challenges their skills.

The hand-holds of advanced routes are not like those of easy routes. An easy route (5.4 to 5.8) has holds that you can insert all four fingers in and place your thumb nicely and pull yourself up.

Even some 5.9’s have grabbable holds or “jugs.” These tempt the novice to yank upward.

Advanced routes have many “crimper” holds plus small holds that you can only fit three, two and one finger into.

There may be some pulling actions, but nothing compared to the big holds of easier routes.

Yoga involves no pulling upward of partial body weight or no gripping onto anything, though at the same time, advanced poses seem as far away as the moon to beginners.

I’m not aware of any research pitting the fat burn of climbing to yoga, but if you want to burn serious calories in 30 minutes and have never climbed before, I recommend that.

If you’re an experienced climber, I have to believe that you’ll still burn more calories or fat minute for minute than will a proportionately skilled yogi — especially if you’re on lead or taking on tough bouldering problems.

Yoga, by the way, will enhance climbing skills — so do both!