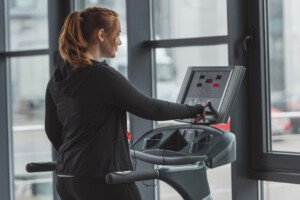 It’s entirely possible to do a blistering HIIT workout on a treadmill without having to worry about time being used to switch the speed settings.

Having to switch the speed settings will NOT interfere with HIIT on a treadmill.

I’m a former personal trainer who has done HIIT on a treadmill for many years. This includes zero incline running at maximal speeds.

This is where it can get a little hairy when it comes to switching back to the recovery pace.

• You’re at the end of a maximal sprint on the treadmill.

• It’s uncomfortable to poke at the buttons to get the speed down to your recovery interval.

What some people do is, at the end of the maximal speed interval, straddle the tread – both feet planted on the outer frame of the tread belt.

This allows them to stand still while changing the setting, rather than struggling to change the setting while nearly collapsing after 30 seconds at maximal speed.

I do not recommend this approach, though it solves the problem of trying to aim your finger on the button while you’re in full sprint mode and down to your last breath.

The problem is that the sudden deceleration that occurs from shifting from full-out sprint to dead standstill can cause an injury to the hamstrings!

The athletes continue jogging even though it’s deemed a false start. Why don’t they dead stop after that second gun blast? Because they know that a dead stop – sudden deceleration – could injure a hamstring.

Sometimes they’ll jog halfway out on the 100 meter course before stopping.

If you’re running your maximal speed on a treadmill, you’ll risk a hamstring injury from a sudden dead stop.

So what should you do when it’s time to slow down the speed and you’re breathless at the end of a sprint interval?

Learn to get used to pressing the speed button while you’re sprinting and heaving for air. There’s no other way around it.

It CAN be done.

Depending on the make and model of the machine, you’ll need to hold your finger steady on the button to drop the speed down to your recovery interval.

This is quite uncomfortable.

Other models have individual speed buttons. So if your recovery interval is a 2 mph walk, just hit the “2” button. This is how most treadmills operate.

Do not hold on with one hand while the other hand is fumbling at the buttons. This one-sided gripping will cause unequal forces on the body and can result in hip strain.

Consider the discomfort of switching to the slow speed, after completing a blistering maximal run, as part of your HIIT training on a treadmill.