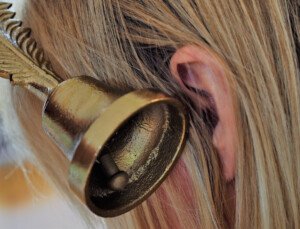 Should you exclude acoustic neuroma as the cause of your tinnitus if the “ringing” is in both ears?

Ninety-five percent of acoustic neuroma patients have the tumor in only one ear.

If you have NF2, you probably already know it, as most patients begin developing signs by their teens or early 20s.

So let’s talk about AN in a non-NF2 person; the tumor will be unilateral. Often, tinnitus is the first symptom.

When a patient reports unilateral tinnitus to a doctor, the doctor should take special note of this as being suspicious for an acoustic neuroma.

Though very rare (2,000-3,000 diagnoses yearly in the U.S.), an acoustic neuroma needs to be ruled out in cases of unilateral tinnitus.

The vast majority of unilateral tinnitus is NOT caused by an acoustic neuroma – which is benign and slow growing.

A person with tinnitus that seemingly comes from both ears may feel a sense of strong relief due to the following thought process:

“This can’t possibly be an acoustic neuroma because I hear the tinnitus in BOTH ears!

Whew! Here I am, fearing I have some kind of TUMOR that might need radiation treatment or whose surgical removal might cause permanent hearing loss – but thank God, these things affect only one ear.”

I was reading some posts on an AN site by patients; they were describing their initial symptoms related to these noncancerous masses.

What got my attention was a post by a woman who said that her tinnitus, before the surgical removal of her acoustic neuroma, had been in BOTH ears – and she did not have the NF2 genetic disorder.

You may think, How is that possible, both ears?

Dr. Isaacson explains, “Tinnitus is most commonly perceived on the same side as the tumor but can occur in both ears.

“The hearing pathways crossing in the brainstem is the likely mechanism why it can be perceived in both ears.”

So there you have it. You are not automatically off the hook from an acoustic neuroma just because the tinnitus is bilateral.