Cause of Two Periods 14 Days Apart Happening Only Once 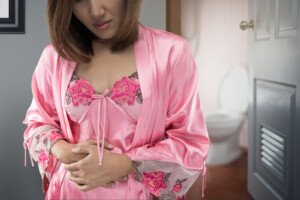 The cause of a period coming exactly two weeks after the one before that, and never happening again, may very well be from desire and will.

But it’s also possible for the instruction to be conscious or more deliberate.

“Menstrual bleeding that comes two weeks after the previous period is likely due to anovulation or lack of releasing an egg,” Dr. Kimberly Langdon, MD, medical advisor at Medzino.

“Lack of ovulation may be due to stress, and that certainly can be the case prior to one’s wedding [or vacation],” adds Dr. Langdon.

Vacation to Be Ruined by Period

Some years ago I had planned a trip to Hawaii. The days I’d be there fell smack on the days I was expecting my next period. I was infuriated.

This was a big thorn in my side in the weeks leading up to the vacation.

According to the first day of my previous period, my next cycle would begin a few days after I arrived in Hawaii! I was fuming!

However, two weeks after the preceding menstrual cycle began, I started another period; the interval was only 14 days.

This meant that the last day of this next menstruation was the first day of my 10-day vacation!

I just felt SO elated, sitting on that plane as it flew over the ocean, knowing that THIS day was the LAST day of my cycle!

I just couldn’t believe it worked out this way – a 14 day interval! It was a gift!

Never before had I had a two week interval (my next-shortest interval had been 19 days, and these were only a few or so), and no 14-day interval ever occurred again.

I have to believe there was a psychological component to this. Could my internal griping about the projected date of my next cycle have actually “instructed” my cycle to come much sooner to spare me the inconvenience during my vacation?

There is no way that this was a coincidence.

In all the years that I had been menstruating, what are the odds that the ONLY time I have two periods 14 days apart coincides perfectly with a much-anticipated trip to Hawaii?

Is “willing” menstruation to begin sooner a dependable method?

Dr. Langdon says it is not.

“There are medical ways to cause a period to come early or to delay one for a week or two,” says Dr. Langdon.

“Birth control pills can be used to delay a period by skipping the placebo pills and starting the next pill pack during the week that the period is expected.

“The mind is a powerful tool for change, so it’s not out of the realm of possibility that one could ‘will’ an early period — especially if anxiety is severe enough.

“Anxiety is stressful, and stress affects our menstrual cycles among other bodily processes.”

Because I am now postmenopausal, I can say with 100 percent accuracy that the 14 day interval between two periods was a one-time event.