Childhood Obesity & No Exercise: Which Starts the Cycle? 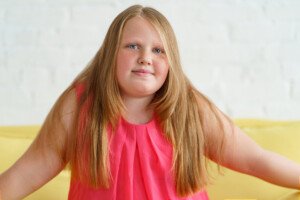 If the average obese child is sedentary, did the obesity cause the inactivity?

Or does being “lazy” cause the excess fat to pile up in a child’s body?

“This answer depends on the child,” says Dr. Lisa Lewis, MD, a board certified pediatrician in Fort Worth, Texas, and author of “Feed the Baby Hummus, Pediatrician-Backed Secrets from Cultures Around the World.”

“Many overweight children are very active,” continues Dr. Lewis. “Their weight does not hinder them from exercising.”

Obesity, or what a parent might see as plump, chunky, chubby or pudgy in their child, should never be an excuse for promoting lack of exercise or avoiding sports participation.

Though a heavy child won’t be breaking the tape in a sprint race, they can do pretty doggone well in martial arts, skating, hiking, and even aerobic activities like basketball, volleyball, soccer and tennis.

But Dr. Lewis says, “If they are eating the wrong foods, then even with intense exercise these children will remain obese.

“Some children are naturally sedentary and don’t enjoy exercise. If these children overeat or eat the wrong foods frequently, they have an increased risk of obesity.”

Exercise and the Obese Child’s Body

Maybe you’ve always thought that exercise would be difficult for overweight children.

And you’re partially correct. Certainly, running around the school track would be difficult for a sedentary overweight child.

But it’s also difficult for a thin sedentary adult.

Though it’s common sense that obesity will discourage physical activity in kids, there’s also research that shows this.

As time goes on, overweight children do less and less physical activity and increase sedentary behavior like TV or computer entertainment.

But what about kids of normal body weight who take to watching a lot of TV or computer use?

The study shows that this does not necessarily cause them to gain weight. But one study is not the gospel.

The journal, International Journey of Obesity, 2014, has the full report.

What makes this study unique is that it investigated the connection between childhood overweight and physical activity over time, whereas most other studies measure data from a single snapshot in time. 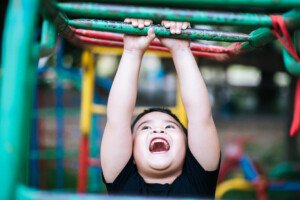 • The age of the children in this study was that of third and fourth grade, and consisted of 600 kids.

• For two occasions they were equipped with a special activity tracker, for seven days at a time: 1) at the beginning of the study, and 2) six months later.

• The tracker recorded activity around the clock, and was compared with data of fat mass at the start and end of the study.

• Children with the highest levels of body fat experienced the largest reduction in physical activity over the six month period.

Does this mean that being obese makes it difficult for these children to exercise or play sports?

Or does it mean that kids who’d rather sit around all day and overeat, in general don’t care to run around, jump and get winded — and as a result, over time they gain fat mass?

Though nobody will argue about the hardship of extended running on an obese body, this doesn’t explain, from a mechanical and cardiorespiratory perspective, why so many clinically obese children are very sedentary.

Physical Activity for Obese Kids May or May not Involve Running 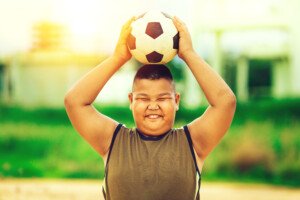 It could be karate, dancing, jumping on a trampoline, bike riding, extended walks, badminton and ping pong.

It could also come in the form of delegating some housework or yard work duties, to replace some TV and computer time.

This can add up over the long-term. Put your overweight child to work; he or she is part of the household too!

Just make sure that the work is age appropriate. A fat young child can rake leaves, sweep and pick things up off the floor.

Carrying loads of laundry, transferring washed clothes into the dryer and retrieving dried clothes from the dryer are also activities that a young child can perform.

Childhood obesity is no excuse for excessive TV and computer time.