Karate Board Breaking Tricks for Beginners 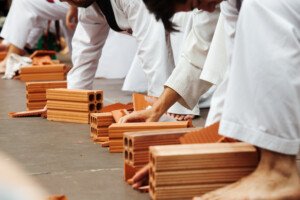 Are you a beginning karate student who’s been struggling to break boards? I have many years’ experience in karate and other hard style martial arts like taekwondo.

There are actually several tricks to board breaking, even though the more boards that are stacked together, the more difficult it is to break through them.

When you see board breaking demonstrations, the practitioners rely on a few tricks that are generally non-detectable by spectators who have never studied karate. However, an astute observer may pick up on these tricks.

When I was new to this, I immediately realized what one of the tricks was; and I was told what the other trick was.

In board breaking demos, the person (or sometimes, two people together) who is holding the target will move it towards the demonstrator’s kick or hand strike at the last second, an essentially imperceptible move, unless you’re watching this person, rather than the person throwing the kick, punch or elbow strike.

I was watching the people holding the boards and noticed that at the last moment, they moved them just a tiny bit into the oncoming foot or punch.

This opposing directional force increases the stress on the wood, or, to put it another way, tacks on speed to the total acceleration of force that the wood surface is being subjected to.

The result is that the board (s) is easier to break. A more extreme or obvious version of this is if a person is throwing a karate kick at a target that’s being held by one person.

As the karate kick flies towards the target, the holder rams the board into the kicker’s foot. This will make it easier for the kicker to break the board.

If your partner even subtlety retracts the board from your foot or hand, this will make it more difficult to break the wood.

A novice partner may very well do this out of natural fear of your oncoming foot or punch; a slight recoil.

Their posturing will not be solid, and this will impair your ability to break the board.

This is why karate instructors teach students specific ways of holding the targets; a solid, very sturdy stance; in fact, it’s usually the “forward” stance, which is a karate stance for stability.

The arms that hold the target are to be straight, thereby providing more solidity, resulting in the wood absorbing maximal impact.

Karate students are instructed to hold the board so that the wood’s grain is horizontal. This makes a huge difference!

I’ve seen people struggling to break single boards, and then it’s discovered that their partner is holding the target wrong, with the grain vertical!

Following through with your karate strike is another trick. A beginner may, out of fear of getting hurt, pull their punch or kick at the last moment.

Of course the board won’t break. Follow through, as though the target is six inches further back than it actually is.

If you pull a punch (after making contact with the wood) and the board doesn’t break, you’ll feel this MORE than if you follow through and snap the wood in half.

Do not be fearful of breaking your knuckles, elbow or foot. And that’s the final trick to karate board breaking:

Do not be afraid to follow through with your strike; pretend the target’s surface is six inches further back than it actually is, and just go for it.

I once broke three boards at once using an elbow strike. I’d be lying if I said none of this success had anything to do with how securely my partner had his hands stabilizing the target, and how rigidly straight his arms were.

When my elbow went through the board, I never felt a thing. But I felt the first attempt because I had reflexively stopped short of a full follow-through. The second, and successful attempt, felt as though I put my elbow through paper.