Do Halfway Pull-ups and Chin-ups Count As Real? 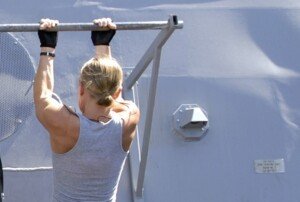 What is it about the pull-up or chin-up that encourages so many gym-goers to go only halfway?

Well, that’s because when you’re hanging and not strong enough to complete a full range of motion—all the way up, then all the way down to a straight hang before coming back up—it’s not possible to lighten the load, as is the case with a bench press or back squat.

So what does the exerciser do? He (or she) short-strokes the movement.

What I’ve seen most often, though, is the version of going all the way up with a pull-up or chin-up, then coming down halfway or a little bit past halfway (and no further) before starting the next repetition.

Halfway Pull-ups and Chin-ups Do Not Count
It could be relatively easy to cheat on this movement, yet at the same time, find it nearly impossible to do just one full range repetition.

However, I’ve seen people do numerous halfway reps, which means they should be able to complete at least two or three full range reps.

These folks are more concerned about piling on repetitions at the expense of complete range of motion.

Though occasionally you will see someone bringing the bar in the bench press down only part-way, the vast majority of people bring the bar down all the way.

Same with the back squat; people strive to get parallel (though there is that occasional person who goes only one-quarter way with a weight that’s too heavy).

Pull-ups and chin-ups should be treated just like the bench press and back squat, in that you should try really hard to complete a full repetition: all the way up, all the way down to a straight-arm hang, before starting the next rep.

I know it’s difficult, but once you complete a single, full, bona fide repetition, you will be SO psyched up, that before you know it, you’ll be completing two, with that dead hang in between.

And then three, and then four. Then in no time you’ll be doing eight reps!

Really, you should try to stay away from those clusters of mini-pull-ups or baby chin-ups. They fool nobody.

Just dare yourself to go all the way down to a dead hang. It will be easier to face this challenge if you anticipate its difficulty and accept that you’re probably not strong enough to pull yourself back up past the halfway mark.

Grab the bar and pull up, all the way, chin over bar, then lower yourself to the full hang, then pull with all your might. Even if you can’t budge more than a few inches, that’s your next set.

What if you can’t even get up to the bar at all? Well, that’s a whole new article, getting strong enough to do that.

But once you’re strong enough to do that, avoid getting into the habit of short-stroking. Halfway pull-ups and chin-ups do not count. They are for the birds.

You’re depriving major muscle groups from a full workout, no matter how many reps.