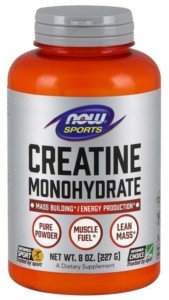 If an elderly person wants to gain muscle, should he — or she — take supplemental creatine?

A study from McMaster University set out to find some answers. The typical elderly person  — certainly not those who passionately strength train — has a significantly reduced amount of muscle mass.

Beginning at around age 30, a person will lose five pounds of muscle per decade if he or she does not do any strength training.

The McMaster study was led by Dr. Mark Tarnopolsky, and he found that in elderly people who strength trained, taking creatine in combination with conjugated linoleic acid produced a better result than just the strength training by itself.

The 49 study subjects were at least 65 and did resistance exercise for six months.

All of the subjects experienced improvements in strength. However, greater muscle-endurance gains, greater increase in muscle growth and more of a decrease in body fat percentage were realized in the creatine/CLA group. The full report is in PLoS One, 2007.

Natural Production of Creatine in Our Body

The human body produces creatine naturally. It is derived from amino acids, the building blocks of protein.

The muscles use creatine for energy. The food source of creatine, not surprisingly, is meat.

The reason skepticism for supplementation exists is because typically, the athlete consumes two to three times the amount he’d normally get from eating a lot of meat.

It would be intriguing to have a study following people beginning at age 65, for years on afterwards, to see how creatine affects them, in combination with lifting weights. 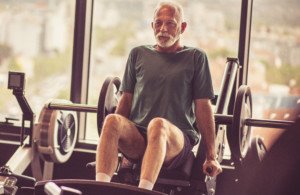 Are you over 65, have never lifted weights and want to gain healthy muscle?

My opinion, as a former personal trainer, is that you don’t need supplemental creatine to experience increased strength and muscle gain from lifting weights.