Why Bench Pressing Causes Muscle Twitching in the Pecs 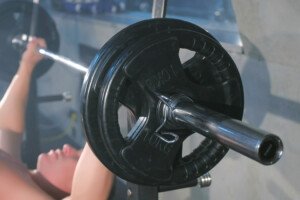 Do you find that your pectoralis muscles twitch after a set of bench presses, either right after or a few hours after?

Twitching can mean a neurological disease—but only in very rare instances, and the “twitching” in those instances is not the same as the twitching you feel when your muscles are just plain tired or when you’re under stress.

With all that said, though, what causes your chest muscle fibers to twitch after bench pressing?

“For those of you who bench press, the major upper chest muscle that provides the strength for pushing up weights is the pectoralis major,” notes Anthony P. Geraci, MD, associate professor of neurology at Donald & Barbara Zucker School of Medicine in New York.

“It would be very normal to feel a twitch in the chest,” says Dr. Geraci, “and many people feel that the twitch is deep and perhaps even under the pectoralis major.”

Keep in mind, though, that the pectoralis major is a power-producing muscle with a lot of fiber packed into it.

“There are only two muscles under the pectoralis major,” says Dr. Geraci. “The pectoralis minor and the intercostal muscles, neither of which contribute much to the power needed to bench press.”

Function of the pec minor: “The pectoralis minor rotates our upper arm; the intercostals allow us to expand the chest when we inspire (breathe in).”

Feeling twitches in your pec muscles after bench pressing?

“If you feel a twitch in your chest but don’t actually see it, that is because twitches can occur anywhere in the muscle, and if they are in the deep part of your pectoralis major, you probably won’t see it, depending on the bulk of your muscle.”

“Not to worry though, it is still just a benign fasciculation (twitch),” assures Dr. Geraci, “and you can keep on pushing up that bar!”

After bench pressing, in which the cells have been stimulated and injured (but a good kind of injured) by this compound movement, chemical changes are triggered.

The muscle cell membranes have been challenged (think of what happens as you strain to complete a set of eight repetitions with a heavy barbell — that’s a lot of load on the cell membranes).

The “chemical soup” of the muscle fibers is changed and this leads to what seems to be a random innervation of nerves that contract the fibers in the pecs: what you perceive as twitching.

Think of it this way: Twitching muscles following your bench press routine mean that you trained with gusto and have stirred up the ingredients for adaptation—which leads to hypertrophy.