Does Melanoma Make You Get More Normal Moles Every Year? 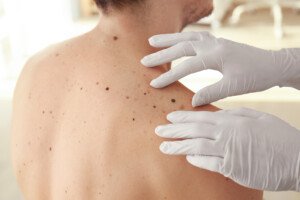 So if you’ve been diagnosed with melanoma, will this make more normal or regular moles appear on your skin year after year?

It may seem like an odd question, but a lot of people would like to know the answer.

So for this article I asked Dr. Jennifer Gordon, who is board certified by the American Board of Dermatology; she practices at Westlake Dermatology located in Austin, Texas.

Dr. Gordon explains, “Melanoma does not make you ‘get more normal moles.’

However, a higher number of nevi (and freckles) correlates with an increased risk of melanoma, so there is a relationship.”

“Nevi” rhymes with Levi, and is the plural of nevus (nee-vus). A nevus refers to a regular or normal mole.

So the more nevi or moles you already have, consider this a risk factor for developing melanoma.

A mole can become cancerous, so it stands to reason that more moles = an increased risk of melanoma.

“Also having atypical nevi (this is a term used after a biopsy, not just by looking at nevi) increases your risk of melanoma,” says Dr. Gordon.

An atypical mole refers to a nevus whose cells are more likely to morph into malignant than are typical cells. (The image below shows an atypical mole.) 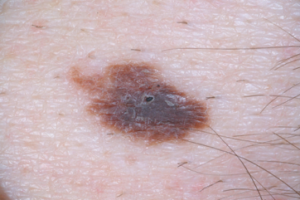 This doesn’t mean that the atypical mole WILL become malignant; only that it’s more likely to, when compared to a typical mole.

Usually, atypical nevi look a bit odd; they may be pencil-eraser sized or bigger and have irregular borders.

“Because sun exposure is a large risk factor of melanoma and also correlates with number of freckles and nevi, the field effect of this exposure will likely increase both,” says Dr. Gordon.

“However, it is important to remember that there are many melanomas that occur in people with very few moles and in areas that are not sun-exposed,” such as inside the mouth and in the eyes.

So in summary, the development of melanoma will not cause the patient to acquire more normal moles.