Blood Tinged Crust in Inner Corner of Eye: Cause? 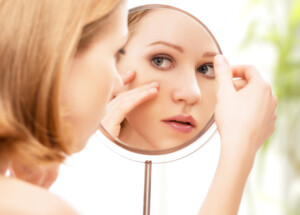 Have you discovered blood tinged gunky crust in the corner of your inner eye?

My experience with this will give you great peace of mind, but I also interviewed a doctor whose explanation will be equally reassuring.

If you have this symptom, I’m betting you wear contact lenses–and especially I’m betting you’ve been wearing them for a very long time, and for at least 10 hours a day.

Every night when I removed my rigid, gas permeable contact lenses, I had to clean out the inner corners of my eyes.

One day I began noticing a reddish tinge to the crust that I was cleaning out of the inner corner of my right eye only. I examined the eye and could not find any kind of scratch or trauma to explain this.

The blood was never on the eye anywhere nor on the lid; it was only mixed with the gunk or crust that forms in the inner corner as the day wears on.

I speculated that I had some mild conjunctivitis going on, since there was more crust coming out of the right eye than the left, and years ago, I had had conjunctivitis—and a LOT of this substance (but no blood in it).

I realized I had not soaked my contact lenses in an enzyme solution for quite some time, and theorized that accumulated protein and oil deposits on the lenses—that were not getting removed during the nightly cleaning process—were irritating my eye and stimulating production of the crusty gunky substance.

But how the apparent blood was getting mixed in there, I had no idea.

Well wouldn’t you know, this problem ceased after the contacts had been enzymed.

I still got the crusty gunk, but there was no red in it. Another thing I noticed is if I wore my contact lenses for fewer hours (putting them in in the afternoon rather than morning), there was less crust.

For a long time this problem had been solved, and then one day I noticed again the red tinge—just a very tiny bit—and I had been wearing my contacts from morning till night.

Contact lenses should be enzymed every month, and I had not been doing that. I began wearing them less again, and the tinge disappeared.

Then I stopped wearing contacts altogether, to prepare for LASIK surgery.

The amount of crust in the corners of my eyes come nighttime immediately became significantly reduced. There was no sign of that blood.

An accumulation of gunky crust in the corners of my eyes, since stopping contact lens wear, has remained minimal, and of course, there is no sign of any minute traces of blood.

What does a doctor say?

“Contact lenses can cut down on the oxygen underneath them, and as an adaptation to the lack of oxygen, this causes extra capillaries to grow to help bring more oxygen to the eye,” explains Carolyn Dean, MD, ND, Medical Advisory Board Member, Nutritional Magnesium Association at nutritionalmagnesium.org.
“Occasionally one of these capillaries, that is close to the surface, may ‘leak.’ If the person doesn’t have enough magnesium and vitamin C and fish oils for capillary membrane stability, the capillary will be more friable.”
How reassuring is that? I bet tons, since the presence of blood near the eye can easily alarm just about anybody.