Best Exercise to Start Off To Lose 100+ Pounds 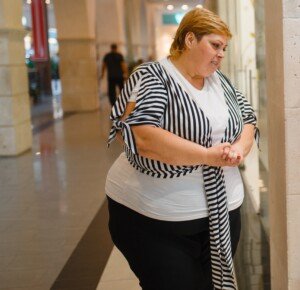 Do you know the ONE, single exercise to start off your 100-pound weight loss venture?

I do! Can you say DEADLIFT?

You can lose a hundred pounds with the help of this multi-joint, whole-body exercise.

It’s unthinkable, in the minds of virtually every person who wants to lose at least a hundred pounds, to start doing deadlifts as their kickoff exercise.

Instead they make a beeline straight to the elliptical or stationary bike—for their starting-off exercise. Or they get into the pool and wade with Styrofoam “dumbbells.”

Or they get on a treadmill and walk a whole hour while holding on, no sweat. Six months later, they’ve lost only a few pounds.

If you want to lose 100 pounds or more, you have to do a lot more than “just get moving.” 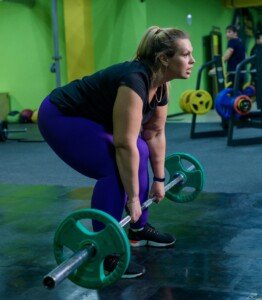 This advice, from the U.S. government, is designed to appeal to the largest possible demographic. But appeal doesn’t mean it’s the best advice.

How the Deadlift Will Cause a 100 Pound Weight Loss

First, don’t assume you’ll stay the same size or get bigger by taking up the deadlift.

This myth arises from the fact that some competitive powerlifters who excel in the deadlift appear to be “fat” or have a lot of excess fat in their bellies.

Rather, this portly individual was likely drawn to this exercise because he—or she—knew that being very overweight would not be a hindrance, as it would be if they tried to get on a basketball team or train for a 5K race!

It’s a lot easier for a person, who’s 100 pounds overweight, to push hard with the deadlift than to learn how to ski, inline skate, mountain bike or hike up hills.

Though I’ve seen very large people on hiking trails, it can be unforgiving, thousands of steps up a hill with a 250 pound body.

Whereas with the deadlift, you stand in one spot and never move from it while performing the exercise.

This is very appealing to the very overweight person who’s serious about exercise but hates jogging on a treadmill or hopping and spinning around in a group fitness class.

So they take up the deadlift, and at some point…get bitten by the powerlifting competition bug.

• The deadlift works nearly every muscle in the body: a complete package in just one movement.

• The more muscles worked at once, the more calories and fat you burn during the exercise—and for hours after, providing that the workout was intense.

• And that’s key: intensity. If you just go through the motions with a light barbell without any focus or effort, and there you are, even yakking on your hidden mobile device while doing so…you can forget losing 100 pounds.

• The deadlift is actually a very easy movement. There is no funky balancing required. You need not fear embarrassing balancing stunts that many personal trainers have their obese clients do smack in front of other gym patrons.

• Though the deadlift is a basic, simple movement, it requires mastery of form to perform safely.

• This form mastery isn’t as difficult as you think. It’s just that it’s extremely important. You can easily master the form if you START OUT with a light barbell to acclimate your body to this new movement.

Deadlift As the Starting Exercise for Losing 100+ Pounds
• Since so many muscles are worked at once, this exercise is a super major fat burner.

• Once you have mastered textbook form, your sets should range from five to eight repetitions, with the goal of lifting heavier and heavier weight over time.

• If your form degrades at some point during a set, the barbell is too heavy.

• But you must fight for completion of the set. If you’re not fighting for it, the barbell may be too light.

• I say “may be,” because there are various permutations of deadlift sets. One of them is to use a medium weight (relative to your strength), and go for eight fast reps—though the sets aren’t really that difficult with this medium weight.

• But if you take only 60 seconds in between these quick reps…this will be an intense routine—five sets in all. It’s over in six minutes, but your body will feel worked over, a metabolic blast!

I can write a book on how the deadlift could shed 100 pounds, but consider this article your starting point, your guide to getting started on your venture of losing all that weight.