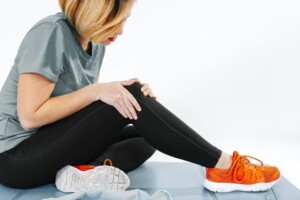 A doctor explains all a woman needs to know about knee pain, which affects women differently than it does men.

You just may have chondromalacia patella, a fancy name that means wearing down of the cartilage underneath the kneecap.

It’s common among fitness enthusiasts and sports participants who engage in jogging, running and jumping activities. Wear and tear from such activities causes the cartilage to soften up.

It then breaks down, causing irregularities along the joint surface, says Michael A. Schwartz, MD, an orthopedic surgeon with White Plains Hospital Physician Associates in NY.

“I usually describe to patients that normal articular cartilage is like the Teflon coating of our pots and pans, as it allows for the smooth gliding of our joint surfaces as we move them,” explains Dr. Schwartz.

“The condition of chondromalacia is similar to when the ‘Teflon coating’ wears off, and the gliding is less smooth.” This condition can affect other joints, but is most common in the knee joint.

Though people over 40 can get it as cartilage deteriorates with normal aging, younger people beware:

This condition can strike 22-year-olds, as the result of trauma to the knee sustained in something as simple as slipping on grass slippery from a recent rainfall, from playing volleyball or from jogging for exercise.

“It can occur in younger, otherwise healthy and athletic people,” says Dr. Schwartz, “when the articular cartilage softens in response to excessive pressure on the cartilage.

“Running and other joint-loading activities are often implicated. Chondromalacia usually develops over time, but it can also be precipitated from an acute injury.

“During such an injury, opposing cartilage surfaces can impact, or bang against each other, which undoubtedly causes some type of damage to the lining articular cartilage.”

A classic symptom of chondromalacia is pain right beneath the kneecap upon locking the knee out straight.

If you suspect chondromalacia, sit on the floor with both legs perfectly straight out in front of yourself so that you can’t even slip a piece of paper beneath your legs.

Place your fingers on the kneecap in question, and press down, as though attempting to hyperextend the leg.

If you have chondromalacia, the pressing-down will almost always cause pain. But if you don’t feel pain, this doesn’t mean you don’t have the condition.

It’s best to seek medical consultation just to be sure the pain isn’t from something more serious. 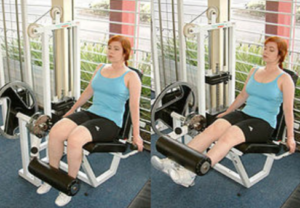 Ice and rest provide only temporary relief, and do nothing to “train” the knee joint to be more reliable and efficient. But leg extensions will work magic.

“But the exercises strengthen the surrounding knee muscles, which can help in alleviating the pressure on the cartilage surfaces.”

If you’ve been diagnosed with chondromalacia, you must make leg extensions and other leg weight routines a permanent part of your life in order to keep the pain at bay.

And that’s not so bad a deal, because along the way, you’ll get toned, stronger legs that will always come through for you.

At first, you will need to minimize or even avoid joint-pounding activities, says Dr. Schwartz.

Activities that can aggravate or cause the condition include “running, especially on hard, unforgiving surfaces, squatting, kneeling, stairs and hill running.

“If one likes to do these activities for their conditioning, I always recommend cross-training, or varying one’s sports.

“With this, running should be alternated with swimming, elliptical machine work, bicycling, etc.”

Over time, as the knee’s surrounding soft tissue becomes stronger, it’s reasonable to expect a full absence of chondromalaciar discomfort. Other sports that can bring it on are soccer, lacrosse and field hockey.

If you’ve never done leg extensions before, and you have this knee problem, then find a chair that’s high enough off the floor so that when you sit on it, your feet dangle.

Straighten the leg with the painful knee so that it is parallel to the floor, but avoid a full lock-out.

Hold for two seconds and lower. Repeat 10 times, three sets, three times daily. If both legs have the condition, you can extend both legs simultaneously.

Do this for several weeks, then graduate on to a weight stack machine, using the lightest weight possible. Gradually increase weight over time, and never quit these exercises.

If you quit, thinking you’ve “cured” the problem, don’t be surprised if within a few weeks, the pain pushes its way back into your life. Leg extensions with weights will keep the pain deactivated.

Keep feet at a 90-degree angle to the shins at all times. Do not let feet just flop around while performing the extensions.

Chondromalacia involves cartilage, a soft tissue that provides shock absorption for joints. On the other hand, ligaments connect bone to bone.

The ACL—anterior cruciate ligament—connects the thigh bone to the shin bone, and this ligament is somewhat shaped like a cross, hence its name, “cruciate” (think: crucifix).

ACL injuries aren’t just caused by a disastrous ski tumble. The ACL can be damaged from athletic maneuvers involving a sudden change of direction while the foot is planted, such as in volleyball, basketball and softball, even dancing or aerobics class.

Landing from a jump can also cause injury. ACL tears often require surgery—followed by up to nine months of rehabilitation.

It’s suspected that the way a female holds her trunk/hips during running and jumping activities, contributes to the higher rate of ACL injury.

Women tend to maintain a more erect posture than men, while running and jumping.

The next theory is that male athletes, more often than female, place their bodies in a protective squat-like position during athletics. Playing in a more erect position makes the ACL more vulnerable to harm.

Why men are more likely than women to do this isn’t clear, but female athletes should be trained to assume squat-positions more often during sports performance.

And if you’re not an athlete? You still should get in the habit of lowering your center of gravity during physical activities such as inline skating, trotting down staircases, hiking and even playing Frisbee.

A lowered center of gravity, while maintaining vertical spinal alignment, creates a protective effect against joint injuries and falling.

According to the American Academy of Orthopaedic Surgeons, here are a few explanations for why women suffer a higher percentage of ACL injuries:

Women will lower risk of ACL damage by learning more efficient techniques for landing, jumping and positioning their bodies during physical activities.

An exercise program that emphasizes upper leg strength and endurance will help the active female sustain the protective squat-like stance while engaged in sports or other pursuits such as trotting down a mountain trail.

It’s time to seek medical advice when the pain won’t go away despite rest and ice; the pain is severe; the knee is swollen or red; appears misshapen; and you can’t bear weight on the knee.

Dr. Schwartz has previously worked as a team physician for high school, college and professional sports, and is the author of numerous scholarly research articles and chapters in orthopedic surgical textbooks.