At What Age Do Ankles Start Swelling? 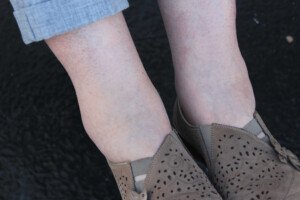 Is ankle swelling more a function of how old you are than your health?

I posed this question to Kathryn Boling, MD, a board certified family medicine practitioner with Mercy Medical Center in Baltimore, MD.

Dr. Boling explains, “This is almost an impossible question to answer, because the age at which swelling occurs has to do with the general health of the person as well as their genetic makeup.

“For example, a woman who has inherited a propensity for varicose veins who has had a few children (which has worsened this condition) might experience swelling of the legs in her 30s.

“That same woman might not have swelling until her 40s if she had remained childless.

“Also, an athletic person of 60 might never have swelling in the legs, while a very obese person in their 20s might be having constant lower extremity swelling.

“That same athletic person might have swelling if he went on a long plane trip.

“In general though, the older a person gets, the more likely that they will have some swelling.”

Another Point to Consider

The so-called sock indentations might make you think you have swelling or edema in your ankles—at least if you’ve recently had a milestone birthday such as 40 or 50.

Just because socks cause imprints of their patterns in your skin near the ankles doesn’t mean you have some kind of edema related swelling there.

If you go to a gym and make a point of looking, sooner or later you will start seeing 20-somethings walking around with the patterns of socks imprinted into the skin of their calves at varying points, including near the ankles.

This imprinting can even happen at the wrists if you’ve had a rubber band or a watch band around your wrist. It happens with the pattern of snug fitting underwear at the waist, too.

And of course, as people age, their skin loses elasticity, making it easier to “indent” from something pressing into it, especially if there’s excess body fat.

Dr. Boling diagnoses and treats a wide range of conditions from acute illnesses to chronic diseases such as diabetes and hypertension.