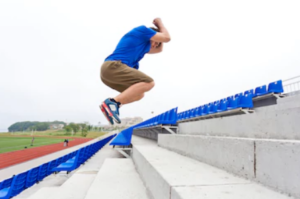 Wondering if after hitting your head you should avoid impact exercise like running or box jumping to prevent a brain bleed?

After all, the jarring and shaking of such activity might induce bleeding in the brain if the tiny veins have already been shaken up by a strike to the head — or so it seems.

Running, jumping and similar impact exercise cause jarring to the body. The head is not excluded from some of this jarring.

If you recently got hit good in the head, you may be fearing the possibility of triggering a slow bleeding in the brain called a chronic subdural hematoma.

If you know anything about chronic subdural hematoma, you know that it’s usually caused by getting hit in the head.

The trauma shears the tiny veins in the brain. It’s understandable if you can’t help but wonder if impact exercise can accelerate leaking of blood from the veins.

“Anything that has a violent acceleration/deceleration could increase the chance of developing SDH,” says Charles Park, MD, neurological surgeon, and Director of The Minimally Invasive Brain and Spine Center at Mercy Medical Center in Baltimore.

“But in general, just running or jumping, really should not cause the bleeding.”

So if you, for instance, slipped on ice and fell backward, striking your head on the pavement, but got right back up and had no neurological symptoms, you can go running or do your jump rope or stool jumping exercises—as long as you feel perfectly fine.

Certainly, avoid these if you have any kind of neurological symptom, and instead head to the emergency room.

But again, if you feel fine, then you can do your exercises. But avoid anything that puts you in a potential position of falling and hitting your head a second time—just in case you’re vulnerable to a chronic subdural hematoma.

You really don’t know with absolute certainty if you’ll go on to develop a chronic subdural hematoma or not in the 90 days following getting hit in the head.

So during that 90 day grace period, it would be wise to avoid activities that could result in head trauma, such as horseback riding, skiing, boxing and ice skating.

But feel free to resume your running, step aerobics and plyometric (jumping) drills, as these will not spur on any subdural bleeding.