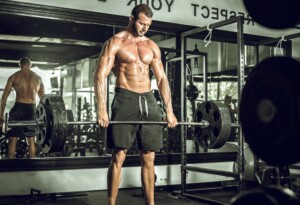 High blood pressure doesn’t mean that you can’t lift weights for building mass. I cite a fascinating study out of McMaster University.

First of all, “Rather than grunting and straining to lift heavy weights, you can grab something much lighter, but you have to lift it until you can’t lift it anymore,” says associate professor of kinesiology at MU, Stuart Phillips.

“Muscle failure” is exactly that: You cannot lift the weight anymore. The limitation isn’t the perception that the weight has become too heavy to mechanically handle.

The limitation is the intense “burning” in your muscles, the “pain” or “hurting” in the muscles. This can occur even with very light weight.

To maximize the light weight protocol, I, as a former personal trainer for a health club, strongly recommend drop sets with relatively short rests in between.

The muscle burn will be significant after several cycles of drop sets. As for what constitutes “light” or “lighter” weights, this depends on the person doing the lifting.

One person’s “light” weight is another person’s heavy weight for lifting.

Here is an example of the protocol, using the shoulder press machine in which you insert a pin into a stack of weights.

This concept, however, can be applied to any lifting venue, such as pulleys, dumbbells and compound moves with barbells.

Find the load that is heavy enough to challenge you for eight reps, but that is not — I repeat — is not an 8-rep max. An 8-rep max requires straining, which one with high blood pressure will not want to do.

So find the load that challenges you at eight reps, yet makes you feel that you can do several more reps, even five more reps. But stop at eight. This will avoid a spike in blood pressure.

Immediately lower the load by one plate worth (which on some machines is 10 pounds; other machines it’s 15 pounds). Then quickly resume lifting.

By quickly resuming, you are keeping the muscles activated and firing, yet you are also avoiding the straining zone, since the resistance is now lowered by 10-15 pounds.

Because this load is much lighter, you may be able to achieve muscle failure without straining and spiking blood pressure.

This depends on the routine, but the more it isolates muscles (as opposed to routines like deadlifts or free barbell squats), the easier it is to achieve muscle failure without straining and significantly raising blood pressure.

In other words, you will most likely reach a point where you cannot do another repetition, even though you are not straining, grunting or breaking form.

When you cannot lift any more, repeat the drop set with the next lightest weight increment.

Go to failure. At such a light weight, again, this should be achievable (an intense, nasty burn), well-before you reach the straining/grunting zone – avoiding a big raise in blood pressure.

Now, at this point, you can stop for a rest; or, you can do yet another drop set. So it may be a three- or four-drop-set routine.

The higher the weight that you start out with, the more descending sets that you can do, which means a greater potential for taxing muscle fibers without significantly raising blood pressure.

Take only 60 seconds in between cycles and do six cycles. The burning in your muscles will be significant, and you will walk away from this regimen feeling worked over.

Another tip for avoiding spikes in blood pressure, while performing this regimen, is to lift the weights fairly fast, but complete the range of motion for each repetition. Slower movements will raise blood pressure more.

“We’re convinced that growing muscle means stimulating your muscle to make new muscle proteins, a process in the body that over time accumulates into bigger muscles,” states Phillips.

This is doable with the regimen just described, while preserving reasonable blood pressure readings.