Yes, colon cancer can increase the amount of mucous in your stools.

And this is what’s so scary, because this substance in the stools is actually a normal occurrence.

The reason for the normal mucous production that appears in one’s bowel movements is so that the transit of the fecal matter through the digestive tract can be smoother; think of the mucous as lubrication.

So naturally, a little bit of this white goop will sometimes make its way into the toilet bowl with your stools.

However, colon cancer can also result in mucous appearing with your stools.

“They can be malignant or benign.  A large villous tumor can still be benign and make large quantities of mucous.”

Get to know what’s normal for your bowel movements.

If you’ve been taking note of what’s normal—over a long period of time—then something out of the ordinary will be more obvious.

On the other hand, if you’re new to getting to know your poops, and you just happened to notice some white goopy stuff in them the first time you decided to inspect them, this could be unnerving—because you don’t know if that’s normal for you.

It’s also important to point out that the white goop that a woman sees with her BMs isn’t necessarily from her digestive tract; it could be normal discharge from her cervix or vagina that coincided with the bowel movement.

Look closely at the mucous whether you’re a male or female to see if there’s any blood in it.

It may have a tinge of orange-brown—that’s normal, from the fecal matter that contacts it.

Another thing you can do is to take a stool sample test at home with Cologuard. 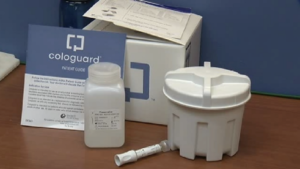 Cologuard is by prescription only.

It uses advanced DNA technology to detect abnormal cells in your stools, and if this test turns out positive, the next step would be a colonoscopy as a diagnostic test to look for colon cancer.