Why You Should Ditch the Barbell Pad for Squats 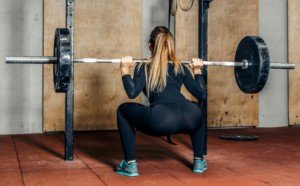 The cons of using a barbell pad for the squat outweigh the pros so much, that this article will cover only the cons.

Yes, the pad is there on the gym floor, but this doesn’t mean you have to use it for the back squat, even if you’re a beginner. In fact, it may even be worse for a beginner.

When I was a personal trainer at a gym, none of my clients — even beginners or slightly built women — used the pad. I discouraged it.

Cons of Putting a Pad on a Barbell for Squatting

The pad will slightly alter the trainee’s center of gravity, causing that person to lean forward a bit more than they would without the cushion.

The increased forward lean diverts some of the force absorption of the exercise to the lower back: not what you want.

The idea with the back squat is to minimize as much as possible the forward lean, even though people with certain limb proportions will need to lean forward more than others.

But that’s due to their limbs. You don’t want to add an extraneous variable that forces you to lean more forward.

The pad causes the barbell to stay higher than if the pad were not there. This higher placement of the bar is what promotes an increased forward lean.

However, the pad can also cause the bar to slip a bit down your back. In rare cases, the trainee can lose control of the bar.

But who wants to worry about this? In fact, the pad may make you feel as though you’ll lose control of the bar—even if that doesn’t actually happen.

Though some people do this even without a pad, it’s still an inefficient technique.

Though the barbell squat does not mimic a real-life movement against resistance (when’s the last time or next time you’ll be rising from a squatted position out in public somewhere with something heavy loaded across your upper back?), the presence of the pad really gives this exercise an element of non-realism. The pad is NOT part of your body.

Using a pad on the barbell almost always causes the barbell to stay against your neck, when in fact, it should rest across your upper back. There should never be any weight bearing down on your neck.