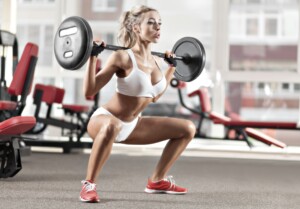 Maybe it’s not your long femurs, but your short shins that make squatting troublesome.

There’s a lot of stuff out there about femur to torso ratio when discussing the back squat.

The “bad levers” of femurs longer than the torso for squatting (including for Olympic style lifting) get a lot of attention in training forums, but something gets very much overlooked: femur to shin ratio.

As a former certified personal trainer, I’m always looking for this trait in people, but it’s quite uncommon.

See the diagram below. Though crude, it clearly shows the disadvantage of having a short shin to longer femur ratio. 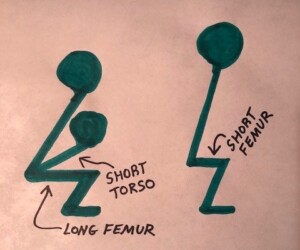 What happens when they parallel squat?

The figure with the short shin can’t get his feet under his hip bones. There just isn’t enough shin length to act as a “pedestal” for his squatting body.

Because his shins are so short, his feet are displaced far forward of his hips, requiring him to have an excessive forward lean — even though his femurs may be the same length as his torso or even shorter.

The second figure has no problem sitting down into a squat while his back stays closer to upright than folded over.

Because there is more length in his shins, his feet are more under his hips.

This means he doesn’t have to lean that far forward to get his shoulders over his feet. Think of his super long shins as supportive pedestals to just sit on.

The long femur in relation to short shin is a proportion that is not determined by overall body height.

Conversely, a 5’4” athlete can also have short stubby femurs, such that most of the leg is tibia, and a 6’7” athlete can be mostly femur.

So if your femurs aren’t longer than your torso yet you fall backwards as your squat nears parallel, it could be due to not having long enough “pedestals” to support your body.

Short shins prevent the feet from getting far enough under the hips — the feet are displaced too far forward. So to get the shoulders over the feet, you may need to practically fold in half.

So how does someone with these levers do a back squat without folding in half?

Widen the stance (this will take getting used to and increasing the hip flexibility) until you no longer must double over. 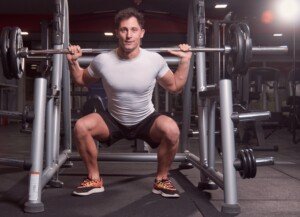 The knees must track over the feet when squatting with a wide stance.

Pointing the feet outward to 20-30 degrees will make the squat even more doable for someone whose shins are disproportionately short for the rest of their body.